This article deals with the sun dance of different Indian tribes, for the instrumental piece of the same name see Klangkarussell . 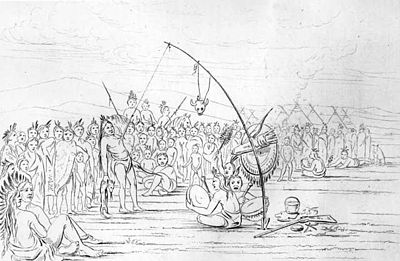 The sun dance is a ceremony performed by various Indian tribes of the American prairies and plains .

Some of the sun dancers pierce their skin on their chest or back and pass wooden stakes tied with cords. The strings are tied to a tree around which the dancers dance for four days from sunrise to sunset with no shade, food or water. This takes place in individual rounds with breaks. Finally they let their whole weight hang against the ropes until the pegs tear from the skin. Due to the different visions of the dancers, there are also other ways of "breaking". For example, on various sun dances, the pegs are pulled out by horses, the dancer pulls buffalo skulls behind him until the skin tears, or he is hung on the tree for a certain time. Piercing the skin on the chest or back is called " piercing " and is not done by all Indian tribes.

The aim of this trance dance is to achieve a "death-like" state through the tortures. During this other state of consciousness, the dancers can get visions that contain answers to important life questions or can also raise new questions.

During the sun dance, healing ceremonies are carried out, during which the audience also has the opportunity to ask for healing. Quite unusual healing successes have already been reported.

By participating in a sun dance, the dancer makes a promise to do at least four sun dances in a lifetime.

The sun dance was widespread among North American Indian tribes in the 19th century. Legend has it that the sun dance a medicine man of the Lakota - Indians from the White Buffalo Calf Woman was delivered themselves.

Missionaries and white watchers were appalled at the "self-torture," and in 1881 skin piercing was banned. In the years that followed, horse harnesses were used instead of wooden pegs for the performances. The traditional practices continued to be used in secret. In 1904 the US government banned the practice of the sun dance altogether. However, during the prohibition period, the dance continued, officially as a rain dance . In the course of the Indian Reorganization Act 1934, the piercing ban was lifted again. Since the 1960s, the sun dance has experienced a strong revival as an important element of the self-confidence of the Indians.

In some Indian groups (for example the Diné in the White Mountains of Arizona ) the sun dance is seen today as an initiation rite by young women. This does not lead to self-harm. Young girls (usually 14-16 years of age) do not sleep for three days. They must also fast strictly. At every sunrise they dance until the sun has reached a certain point on the horizon. This is a stress test. The family gathers on the third day to bless the girls after they have passed the exam. The girl is painted with white clay to symbolize her spiritual connection to the Changing Woman and to make her fertile. Their acceptance into the adult world is celebrated with a dance and a festive meal.

Based on the modern primitive movement in particular , the sun dance ritual was later adapted in western culture under the name of body suspension .

Arvol Looking Horse , a totem bearer of the sacred White Buffalo Woman - peace pipe tradition in the 19th generation, was the first in 1997 to prohibit non-Indians from participating in the sun dance. This concerned the Wi-wanyang-wa-c'i-pi of the Lakota . In 2003, medicine people from the Arapaho , Cheyenne , Cree , Sioux , Lakota and Nakota also came to a resolution to exclude non-Indians from the Holy Altar and the Seven Rites, including the Sun Dance.

The sun dance has often been interpreted as a form of sun worship , the search for visions or as a buffalo dance.

John Fire Lame Deer (Tahca Ushte 1903–1976), Sioux medicine man, suspects the origin of the sun dance in a joyful dance over the spring sun. He writes: “The sun dance is our oldest and most solemn ceremony ... it is so old that its origins are hidden behind haze ... After the darkness of winter, which they huddled close together in their poor shelters, freezing and starving, almost like Animals had survived in hibernation, how joyfully, how gratefully they must have greeted the life-giving sun ... I can well imagine one of them ... getting up to dance for the sun, using his body like a prayer ... "

According to Archie Fire Lame Deer, son of John Fire Lame Deer , a chief of the Lakota, the sun dance has a spiritual and social meaning. The participants in the sun dance are traditionally men; Women only participate in exceptional cases and then only pierce the skin of the arms. The piercings are intended to give men an experience of the suffering that women experience during the fertility phase. A sun dancer learns to understand the pain a woman experiences when giving birth to a child, in a sense to fathom the mystery of blood and pain without having to wage war, as Scout Cloud Lee puts it in another context. The women and the rest of the tribe members support the sun dancers from the “shadow circle”. It is also possible for a sun dancer to use this ceremony to ask for the healing of a family member.

Often young men took part in sun dances. For them it was a rite of initiation . After having passed the ceremony, they were accepted as warriors.

The sun dance is part of the Seven Rites , which include the sweat lodge ceremony and the vision search , which contain their own rites for purification and vision finding.