The title of this article is ambiguous. For the abbot of the Benedictine imperial abbey of St. Peter in the Black Forest, see Ignaz Speckle .

Speckle pattern from a laser from a diffuse surface 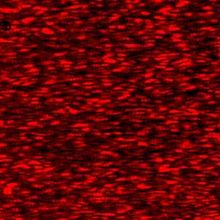 Recording of a speckle pattern using a CCD camera 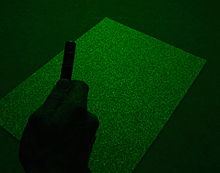 Speckle pattern of a white wall

As a speckle pattern , Lichtgranulation or Lasergranulation or shortly Speckle the granular interference phenomena are referred to, which at a sufficiently coherent illumination optically rough object surfaces (unevenness in the order of the wavelength can be observed).

Speckle formation becomes plausible if the unevenness of the illuminated surface is viewed as scattering centers from which spherical waves of different phases emanate and interfere in the far field . This creates a spatial structure with randomly distributed intensity minima and maxima. As a three-dimensional interference phenomenon there are longitudinal and transversal speckles, which depend on the respective longitudinal and transversal coherence. Transversal speckles are more significant at a greater distance because the individual spherical wave components can be simplified more and more than plane waves. The speckle contrast can therefore be used as a measure of coherence.

When observing speckle on a coherently irradiated surface with the naked eye, one perceives a moving pattern. This is caused by the different interference on the retina when the eye moves. The direction of movement depends on the position of the focal plane in relation to the retina - non- accommodated eyes of myopic and farsighted people consequently perceive different directions of movement. In addition to the brilliance , speckle is perceived as a typical laser property.

Since one only sees the temporally integrated interference with a detector that is slow relative to the oscillation period of the light, the size of the speckle decreases with a larger bandwidth, even if speckle still exists within a narrowly limited spectral range. The effect of transverse coherence on the speckle can be suppressed in this way. With the spectral decomposition of white (longitudinally incoherent) ultrashort pulse laser light, speckles appear in the entire spectrum, although they are not perceived in white light, whereas the highly incoherent white light from an incandescent lamp always appears without any visible phase contrast.

Speckle outside the visible spectrum

The formation of speckle is not limited to optical wavelengths, but also occurs in other areas of the electromagnetic spectrum and with the interference of sound waves. It can even be demonstrated in the case of particle currents, which also have wave properties. In the case of radar , the phenomenon is also known as glitter . The spatially and temporally varying fading of AM radio and radio is related.

If the surface has no systematic structures, the speckle pattern is completely random. If there is a globally repeated fine structure, the local diffraction or scattering effects add up constructively, which is used in X-ray structure analysis to determine structures in the wavelength range.

Macroscopic changes (e.g. scratches, surface structure) have an impact on the overall picture and are larger in the image than the individual speckles. This fact is also used in metrology, where laser speckle is used in the field of electronic speckle pattern interferometry (ESPI) to analyze vibrations, mechanical stresses and to detect submicroscopic surface irregularities. In addition to other classic areas of application such as stellar-speckle interferometry and speckle holography , the speckle effect is used in laser mice that have existed since 2004 for better motion detection on - only macroscopically - unstructured, transparent or reflective surfaces. In addition, more “exotic” application options such as digital fingerprinting of documents have emerged in recent years.

Not only in the field of holography , but in almost all applications that are based on the use of coherent waves, including sonography and optical coherence tomography , the signal / image quality is strong due to the seemingly random spatial frequency-dependent multiplicative modulation of speckle within a certain image field degraded. A point breaks up into a speckle field and can no longer be precisely localized. Typically, speckle is reduced by averaging at different phase conditions. In other words, the coherence length is reduced here. A complementary approach is the analysis of the speckle and the subsequent reconstruction of the local phase modulation of the carrier medium (such as a rough surface). The sub-resolution structure of the medium is also (partially) reconstructed. Here the path leads via optical phase conjugation, i.e. phase reversal and reconstruction of the original phase vector or the amplitude. Since the conjugation is often much more complex, the reduction in coherence is usually pursued. The modulation of the reference surface with a longer integration time or summation of multiple recordings phase-modulated against each other reduces the speckle contrast according to an n · log (n) law. In addition, an increased spectral bandwidth “washed out” speckle due to the increasingly changed phase conditions.

Image processing methods for multiplicative noise reduction are also used. Here the dynamics of the speckle field is statistically evaluated using a frequency filter or other non-linear methods (e.g. median filter with a certain size) and replaced by a mean value. A disadvantage of these methods is the loss of resolution, which is determined by the size of the speckle. Alternatively, there is the possibility of reducing speckle through active analytical methods. Here the (time) modulation of the local signal is recorded as a function of a phase modulation of the source signal and the local amplitude is determined. Ultimately, the goal of a "despeckling" is the reconstruction of the amplitude, excluding the phase effects.