Traditional ship with traditionally sewn-on lugs : the staysails remain attached in the harbor, a change of sails is not planned ( Albatros ) 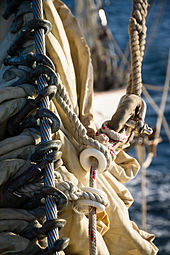 A hanks is a fixing hook on sailboats, similar to a snap hook made of metal or plastic to which the luff of (stagnation) sailing the Stag is attached. Many stay riders are distributed over the entire luff (leading edge of the sail).

To prevent unintentional opening, stag riders are provided with a small safety bolt, especially for larger boats , which sometimes also has to be screwed. A wide variety of types / systems of the stay rider can be found on smaller boats, e.g. B. a patent in which the rider consists of two opposing hooks and rotated 90 ° is threaded onto the stay.

Modern stay riders allow a sail to be quickly attached to the stay and then released again (“on and off”). This is common practice on modern boats in order to be able to exchange headsails on the same stay, i.e. H. To be able to set a headsail of different sizes depending on the wind strength, and to stow away unused staysail (e.g. in port or at anchor). Stowing away not only protects the sails, which are then no longer exposed to sunlight and possibly salt; it also prevents a sail from catching (a little) wind even after it has been folded, creates space on small boats, etc. Also some “ traditional ships ” that are still in service today use a variant of modern stag riders made of solid metal.

Traditionally, instead of the modern stag riders, loops were and are used for fastening to the stay . With them, the sails are permanently sewn in place, so that unused ("salvaged") sails remain gathered in place and z. B. must be tied to the jib boom. Since the material used for sewing (such as Hüsing ) wears out over time, sewn-on loops must be checked regularly and the material finally replaced. In ships that are in constant use in German latitudes from spring to autumn, the material usually lasts one season; in winter the sails are usually chopped off anyway.

An alternative to the stay with stay riders is a profile stay, in which a guide bar runs the length of the stay, into which the luff of the sail is inserted from below. On the one hand, such systems are often used for furling systems, because headsails can be wrapped around a bar with less wrinkles than around individual stay riders. In addition, inserting or pulling out of the guide rail is faster than hitching up the stay riders and gives a better shape on the stay, which is why profile days are popular on regatta sails; Double strips installed in parallel even allow the foresail to be changed “cloth in cloth” (a second sail is raised directly next to the first before the first is recovered), which can save further time for regatta sailors.