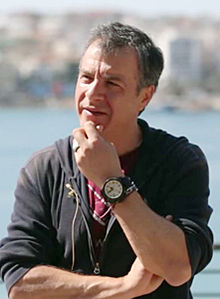 Stavros Theodorakis ( Greek Σταύρος Θεοδωράκης , * 1963 in Drapanias, Crete ) is a Greek journalist and politician . He is the founder of the To Potami party .

Theodorakis grew up in Agia Varvara in West Attica .

Since 2000 he has hosted the popular television show "Protagonistes" (" Protagonists ") on the then public television network NET; In 2006 he switched to the private broadcaster Mega TV. He also wrote a regular column in the weekend edition of the Ta Nea newspaper .

In February 2014, he quit this journalistic activity to found a new party. He describes his To Potami party as “neither left nor right”, “pro-European, innovative, progressive” , which observers place in the center-left of the political spectrum. Although she quickly achieved good values ​​in polls, Theodorakis refrained from running in the 2014 European elections, obviously to focus on the next national election , after which the chance of government participation is seen.