The Stone ( English stone ) is a British non- SI-compliant unit of mass and gravitational force . It is divided into avoirdupois (pounds), ounces, and dram . In traditional English units, a distinction was made between weight and mass only in scientific use. Example: lb f as pound-force .

Until 1985 the Stone was an official unit in Great Britain. Since then, its use for business purposes (e.g. labeling of goods, technical data) has been expressly prohibited by the Weights and Measures Act . The same applies to the units of dram and (long) tone used for explanation above. In some Commonwealth countries it is still customary to state the human body weight in stones ("I have lost two stone five"). "I have lost two stones and five pounds (15 kg)". Stone, as an unofficial unit for human body weight, has a similar meaning to the outdated and abolished kilocalorie in German as a unit for the energy content of (human) food or horsepower for the power especially of internal combustion engines , which despite being abolished are not really disappearing from everyday use.

Sometimes the weight of wrestlers , boxers and jockeys is still given in stones and pounds, but this is increasingly being replaced by a figure in pounds. 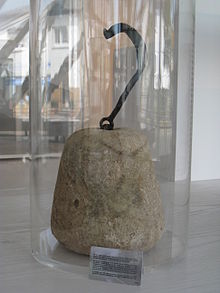