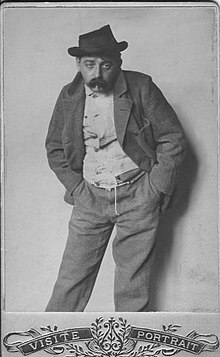 The term strotter (from the old Viennese expression "strotten" = sort out) is an outdated term from the Vienna area for people who rummage around in waste in order to find usable . It is mainly associated with those people who lived underground in Vienna until the middle of the 20th century and for whom strotting was the livelihood. Strotter is sometimes understood as a synonym for a vagabond .

Spread of the term

Because the Strotter was a local Viennese phenomenon at the time, the term was most strongly coined there and could not establish itself on a large scale. An internet survey suggests that only a small part of the total Austrian population is familiar with the term today - only in Vienna is it still understood by the majority. Outside of Austria, both the meaning of the word and the history of the former Viennese Strotter are practically unknown. The Austrian dictionary states that the verb strotten means “poking around” or “looking for usable waste” in the East Central Bavarian dialect, and the noun strotterwould be like a vagabond in the same region. Meanings passed down from other sources are "crook, tramp, bush thief or casual worker".

Around 1900, with the Danube Canal and other collecting canals, essential parts of today's Viennese sewer system were created . Although around 5,000 people found work as a result of the construction projects at the time, the suburbs of Vienna were still characterized by poverty and misery (see History of Vienna ). Soon, out of their individual plight, people came up with the idea of ​​searching the sewage for objects washed out and reselling what they found. The existence of such channel Trotter was known already separated since the beginning of 1893. This channeling time counting to the social questions worst people in Vienna working and homeless tried so to earn a living.

Fishing was done with nets, makeshift weirs that served as sieves, magnets or sieves attached to sticks, with which objects from the sewage flowing past could be caught. Some strotters specialized in searching for certain things. For example, there were “fat fishermen” who looked for bones, leftover meat and pieces of fat in order to sell them to the soap industry after they had been dried.

These people became known to a wider public through the social reports of the Viennese journalists Max Winter and Emil Kläger , who from 1902 visited the underground several times independently of one another. The last Strotter is reported from the 1950s.

Since the economic basis of this subcultural way of life has been disintegrating for many years -  Gabriele Goettle's taz report 2002 interviewed Viennese sewer workers today - a new meaning has come to the fore in today's linguistic usage. In the figurative sense of the word, it is about the utilization and reassembly of found objects from cultural history . It is therefore not at all surprising that an electronic sound artist (musical sampling technique ) from the contemporary scene uses the artist name Strotter Inst. Or that a contemporary Viennese song duo perform as Die Strottern .