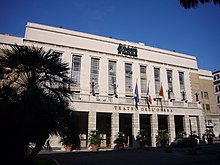 The Teatro dell'Opera di Roma is an opera house on the Viminal in Rome , Italy . The house opened in November 1880 under the name Teatro Costanzi and is located at Piazza Beniamino Gigli 1.

The building, steeped in history, was commissioned by the financier Domenico Costanzi (1810–1898) and designed by the architect Achille Sfondrini (1836–1900). The Teatro dell'Opera di Roma was built in a construction period of 18 months and received its first name, Teatro Costanzi , after the client. The opening took place on November 27, 1880 with a performance of the Opera seria Semiramide by Gioachino Rossini . In the Opera Roma , which has 2,200 seats, numerous premieres took place, such as the operas Cavalleria rusticana (May 17, 1890) by Pietro Mascagni or Giacomo Puccini's Tosca (January 14, 1900).