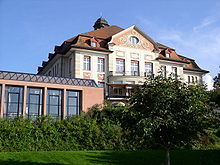 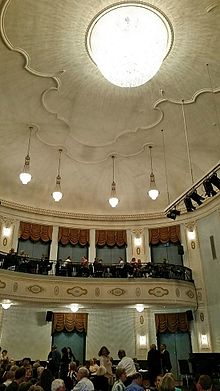 The buildings are to the south, just outside the old town of Zug on Artherstrasse. The sloping embankment offers a view of Lake Zug from all rooms with a west-facing view . The theater-casino is a splendid, Neo - Baroque style building of the local style . The representative historical cultural center is the work of the Zug architects Keizer and Bracher and is recognized as an important building far beyond the region.

While the various rooms book over 700 annual occupancies, around 60 public events of all types take place in the theater hall every year. The Theater Casino Zug is the only full stage within a 30 km radius (the Lucerne Theater and the Tellspielhaus Altdorf (Uri Theater) are the next larger stages) and the only larger guest theater in Central Switzerland. The Theater Casino Zug is a member of the SBV .

The Zug Theater and Music Society, which has been in existence since 1808, supported the building from 1909 and the expansion from 1977 to 1982, and is now planning the cultural program of the Theater Casino Zug. From 1978 to the end of the 2008/09 season, August P. Villiger was in charge. From January 2009 to October 31, 2019, Samuel Steinemann was the artistic director and manager of the Zug Theater and Music Society. Katrin Kolo has assumed this role since November 1, 2019. Born in Munich, she is an academically trained dancer and holds a degree in economics.

There are several works of art in and around the casino, including by Oscar Wiggli ( Syrinx (1985)), a sculpture made of Corton steel as a gift from the Canton of Zug (1985).