On the left a W 28 of the Deutsche Reichspost without, on the right an extension device SA 28 with earth button

The analog desktop phone W 28 ( W ählapparat 28) was from about 1925 by Siemens & Halske developed in 1928 by various manufacturers for the German Reich Postal built. It replaced the previous W 24 desk phone as the standard telephone of the Reichspost. The W 28 is one of the first modern desktop telephones with a compact design. However, this rather small, almost square case also has disadvantages when it comes to repairs: most of the components are located in a small space in the lower part of the case (not, as was previously the case, on the base plate) and are therefore sometimes difficult to access. The Model 29 developed by Siemens at almost the same time , known as the crouching dog , did not make it into series production.

The direct predecessor or the pre-series of the W 28 / SA 28 is the so-called Model 26 from 1926 (Siemens designation VSa.tist.66.c), which does not differ at all in terms of circuitry, but has slots on three sides of the housing enable louder ringtone. The fork is designed more simply, instead of a screwed-on label frame for your own telephone number, the model 26 has a smaller opening punched into the sheet steel housing on the front, behind which a strip of paper can be pushed. The entry of the handset cord is on the back of the housing (on the left of the Reichspost-W 28), the finger hole disc (dial) is made of nickel-plated brass . The upper part is made of die-cast zinc , the base plate is fastened with two long screw bolts, which also hold the upper part. The model 26 is quite rare to find and is now a collector's item.

The SA 28 - see photo above, right model - ( S elbstwähl a pparat 28) was manufactured in Germany for private branch exchanges (Siemens designation Fg.tif.66.av). It is optically and technically based on the model 26, only the housing slots are missing. For other countries or in other countries ( Netherlands , Austria ) this version was built until about 1955. On some models, the designation SA 28 is stamped into the base plate.

Special features of the Reichspost-W-28 are: The screwed-on label frame for your own phone number , the upper part, which can be removed for repair purposes, is now partially made of Bakelite , the base plate and upper part are screwed separately. The zinc die-cast fork has two extremely striking small creases on the underside - this makes it look a bit more massive. The technical components (apart from the hook switch and the number switch equipped with a black Bakelite finger hole disk ) are mounted in the lower part of the housing and are accessible after removing the metal base plate (a screw in the middle must be loosened). In the rear of the device there are two connection terminals for an additional remote receiver. 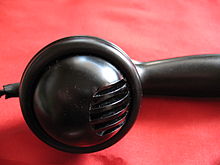 Speech of a W 28 listener

The relatively straight, handy telephone receiver made of black Bakelite with hemispherical sound inlet (lower microphone cap the handset) and woven, textile jacketed handset cord is identical to the model 26 / SA 28. This hemispherical appeal with slits above has a sound concentrating, amplifying effect because the former coal transmitter capsules in their acoustic properties were still quite bad. Hearing and speaking capsules can be exchanged in just a few simple steps. Such standardized capsules were used in continuously improved quality until the 1990s and are still available today (2013). When the receiver is on the hook, the dialing function is mechanically blocked by a pawl - a function required due to the switching of the W 28 to prevent unintentional dialing: the so-called NSA (number switch working contact) is switched before the hook switch. As a result, dialing pulses are generated when the dial is turned back with the receiver on-hook, without a blocking function. This lock also has the useful side effect of enforcing proper telephoning (picking up the handset, waiting for the dial tone, dialing the number). Sometimes the designation W 28 is stamped into the base plate.

The first W 28 / SA 28 up to around 1930 were equipped with the solid die-cast number switches of the type N24 from the predecessor devices - afterwards the newly developed, lighter N30 made of sheet steel was used - this also reduced the overall weight. The pre-war models and extension devices had a nickel-plated finger-hole disc (dial) made of brass until around mid-1938, while the Reichspost models were made of black, structured Bakelite. Nickel-plated finger-hole discs look more elegant, but you quickly get dark edges on the fingertip when choosing, and the production was more complex and expensive. The handsets of the early models do not yet have a decorative edge. Originally, the two alarm bowls with different sounds were made of steel. During the Second World War , the W 28 was occasionally (from the end of 1939) delivered with aluminum bells and later with glass bells in order to save raw materials for armament. In some cases, models were also produced with only one bell shell.

Models were made with and without an earth button . There are also various special devices based on the W 28 / Model 26, for example for the Deutsche Reichsbahn . An ivory-colored (cream-white) luxury edition was also produced, but only in small numbers - the production was associated with greater effort and therefore more expensive. The version for wall mounting that was produced at the same time has similar technical and optical characteristics, but was less common. It has a laterally hinged housing made of deep-drawn, black painted sheet steel with slots on the side and on the underside of the bells and a stable fork made of die-cast zinc. In contrast to the table model, the technology is more easily accessible - the components are mounted on the solid metal base plate.

The technology and appearance of the W 28 proved to be groundbreaking and groundbreaking for the next 20 years. It was exported to the Netherlands and partly also built in Austria. Licenses were also bought in Japan to reproduce the W 28. This telephone model helped the telephone - previously more likely to be found in wealthy households, offices / authorities or business people - to become more widespread. However, decades passed before every private household could afford a telephone. It was not until 1963 that the telephone with the desk phone 61 (the so-called gray mouse ) was also widely used in German private households.

From 1940 and 1948, the W 28 was slowly replaced by the technically greatly improved and much more successful successor models W 38 and W 48 , both of which had emerged from the Model 36 . Due to the shortage of materials, the parts of the W 28, Model 36 and W 38 that had not yet been installed were taken from the cellars and storage facilities in the post-war period in order to restore functional telephones. The originality of the different types was not taken into account - it was important that after the chaos of war one could call again at all. This resulted in some unorthodox compilations. The W 46 designed by SABA could not remedy this situation , as too few of these telephones were produced. Only the W 48 model , which became more widespread from around 1950 and became the new standard telephone of the German Federal Post Office for many years, was able to stop the messing around.

Today the W 28 / SA 28 (and especially the model 26) has become a popular collector's and enthusiast item. Its graceful, elegant shape is still appealing. The devices still work perfectly on analog main connections and telephone systems that support the traditional pulse dialing method (IWV), and also on ISDN via pulse dialing terminal adapters . By installing a modern transistor speaking capsule and changing the hybrid circuit for the back hearing loss, a speech quality can be achieved that corresponds to today's standard. The installation of a hearing protection rectifier is recommended, because loud cracking noises can be produced when operating the fork and when dialing with the modern dynamic earphones. This consists of two anti-parallel connected semiconductor - diodes which are connected in parallel to the earpiece. Such rectifiers were first used in series production from the W 48 onwards.