View of the Tokyo Stock Exchange 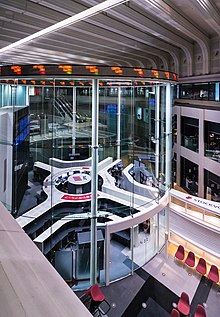 The Tokyo Stock Exchange ( Jap. 株式会社東京証券取引所 , Kabushiki Kaisha Tōkyō Shōken Torihikijo , Engl. Tokyo Stock Exchange, Incorporated ) is a stock exchange in the district Kabutochō the Tokyo District Chūō , and the largest of its kind in Japan and East Asia .

The market capitalization of all companies listed on the Tokyo Stock Exchange in August 2017 was 5,608 billion US dollars, making it the third largest exchange in the world.

The exchange was founded in Tokyo on May 15, 1878, and trading began on June 1, 1878. In 1943, the exchange merged with 10 other smaller exchanges in the country to form the only exchange in Japan. As a result of the bombing of Nagasaki , the stock exchange had to be reorganized and was finally completely dissolved by the US occupation authorities in April 1947. After the amendment of the Stock Exchange Act in April 1948, stock exchanges in Tokyo, Osaka ( Ōsaka Shōken Torihikijo / Osaka Securities Exchange) and Nagoya ( Nagoya Shōken Torihikijo / Nagoya Securities Exchange) were set up on April 1, 1949, with trading from May 16.

In November 2005 it was not possible to trade on the Tokyo Stock Exchange for hours due to a program error.

In January 2010, the Tokyo Stock Exchange announced the launch of a new fast trading system called Arrowhead , which is said to have a latency of 5 milliseconds.

On November 22, 2011, the Tokyo Stock Exchange and Osaka Stock Exchange announced that they would merge by January 2013. When the merger was completed on January 1, 2013, the third-largest trading venue in the world was created under the name Japan Exchange Group, behind NYSE Euronext and the NASDAQ technology exchange .

The Tokyo Stock Exchange trades shares in over 2,200 Japanese and 31 overseas companies. The stock market index of the Tokyo Stock Exchange is the Nikkei 225 , initiated by the Nihon Keizai Shimbun (Nikkei for short), which is now standard in the version with 225 values. In the years of stagnation after the end of the bubble economy in 1990, the more extensive TOPIX (Tokyo Price Index) with 1645 values ​​became much more meaningful, as the Nikkei 300 at that time largely listed shares in companies whose shares in other holdings were mainly too strategic Were hoarded for participation purposes instead of investment purposes and are practically not available on the market. In the first few years of the 21st century , the Topix did not rise above the values ​​from the early days of the bubble economy (1985–86) and has therefore remained at roughly the same level for 20 years, apart from the high at the end of the 1980s. Reasons include the extensive loss of trust and reluctance among private investors, for which numerous financial scandals, unfair business practices and repeated gross mismanagement in most of the large financial institutions are responsible.