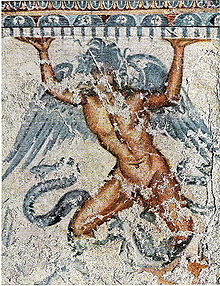 One of the two typhones after which the grave is named

The Tomba del Tifone ( Tomb of Typhon ) was discovered in the Etruscan Monterozzi necropolis in Tarquinia in 1832 . The grave dates from the turn of the second to the first century BC. It takes its name from the images of two typhones depicted on a pillar in the center of the tomb.

The grave complex consists of a staircase that leads down into the burial chamber. The ceiling of the burial chamber (12.90 m × 9.70 m × 1.9 meters) is flat and is supported in the middle by a pillar. There are three steps along the walls. On the lower one, there are still sarcophagi in which the deceased were buried. According to inscriptions, the Pumpu family was buried here.

The paintings in the tomb adorn the ceiling, where there is a cassette pattern in red. A decorative frieze runs on the walls just below the ceiling. It consists of dolphins on waves, plant motifs and a tooth cut . A funeral procession is depicted on the right wall. The pillar in the middle of the hall shows an inscription on the front, typhones are painted on both sides, while on the back there is an image of a Lasa (a female genius ).