The Tsimihety are an ethnic group (more precisely: Foko ) in Madagascar . They mainly settle in the central mountain region in the north of Madagascar. The common name means "those who never cut their hair" and possibly alludes to the fact that, unlike the neighboring Sakalava , who cut their hair in the course of the funeral ceremonies, they are not familiar with this custom. The population group is one of the largest Malagasy ethnic groups. Their number is estimated at 700,000 to over 1.2 million.

Distribution of the Tsimihety (light yellow in the north), in relation to other Malagasy ethnic groups. Different distributions were found by Tofanelli et al. shown

The Tsimihety trace their origins back to settlers from the east coast who immigrated with their cattle to the Mandritsara plain in the 18th century . It is said that the tribe then consisted of leaderless refugees who had fled the slave wars in their homeland. Soon after, they came under the rule of the Volafotsy clan, associated with the Maroserana , who migrated north from the territory of the Sakalava. Peter Wilson, an anthropology professor who specializes in Madagascar, writes that the Tsimihety do not fit into the usual patterns of anthropologists, since these people " did not create symbols or rituals or tribal rules " ( didn't create symbols or rituals or tribal rules ) as other tribes do; they can " only be described negatively " by what they did not and do not do. Thus they are not a tribe in the strict sense of the word, because they obviously lack tribal ties, and there is also a lack of social integration and hierarchical power structures within the ethnic group. Their relationships remain centered on the biological family and kin. 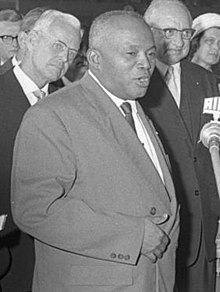 Philibert Tsiranana , of the Tsimihety ethnic group, was the first president of post-colonial Madagascar.

The anarchic system worked for the Tsimihety until the 19th century. From 1823, however, Radama I , the King of Merina , brought the entire island under his control ( Kingdom of Madagascar ). He subjugated the Tsimihety, but abolished slavery.

The French colonial rule absorbed the Tsimihety 1896 as part of the Colonie de Madagascar et dépendances . Since that time, Tsimihety have always been active in the politics of Madagascar. Philibert Tsiranana , a Tsimihety from the vicinity of Mandritsara , was the first president of the newly formed Repoblika Malagasy when Madagascar was still a partially autonomous region within the French Union (1959), and he also remained president for over ten years after the state was its Had gained independence from France in 1960.

David Graeber , an anthropologist who specializes in the study of anarchic systems, writes that the Tsimihety are one of the few historical social systems in which no state authority was accepted and where real anarchy was lived:

“They are characterized by resolute egalitarian social structures and practices. In other words, they are the anarchists of northwest Madagascar. To this day, they have received a reputation as masters of evasion: among the French, officials complained that they could send delegations to recruit labor to build a road near a Tsimihety village and the terms with evidently cooperative elders to negotiate; and when the planners returned with the equipment a week later, they found the village completely deserted - every inhabitant had moved to some relative in another part of the country. "

The Tsimihety are one of the rare examples of a culture that is fundamentally anti-state. Graeber writes that there all forms of government structures were rejected, even in the hinterland and in the communities. Informal consensus was the basis of the decisions on the ground and anyone who acted like a leader was considered suspect; Giving directions was considered wrong, expecting someone to be responsible or doing something was also wrong, and even the concept of working for a wage was morally unsustainable. Ultimately, the Tsimihety were "swallowed up by the state " ( eventually gobbled up by the state ) and gave up their " utopia " because they were looking for economic advantages and valued the infrastructure.

The Tsimihety are patrilineal and kinship with male ancestors and descendants are the most important for women and men. The conventions call for expanded exogamy , which, in conjunction with high birth rates, has led to a widespread distribution and mixing of ethnicity with neighboring ethnic groups. Society is also known for maternal uncles taking on certain social functions.

The Tsimihety language is a dialect of Malagasy , which in turn belongs to the Malayo-Polynesian languages .

As in most of Madagascar, the Tsimihety society and economy are primarily agricultural. Rice is the main foodstuff and cattle are kept. Fieldwork on Tuesdays is a fady ( taboo ). The economic center is Mandritsara.