The USA with conventional sails (February 2, 2009 off San Diego) 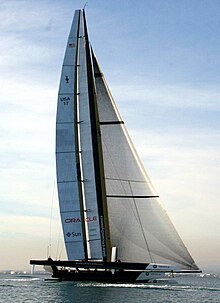 View of the newly developed two-part wing sail on the left, the foresail of the USA on the right (January 22, 2010 off Valencia)

The USA 17 (BMW Oracle Racing 90) is a trimaran built by the sailing team BMW Oracle Racing for direct comparison with the Alinghi 5 catamaran in the 33rd America's Cup , which was held in 2010. On February 12, 2010, the USA won the first race against the Alinghi 5 by over 15 minutes, and on February 14, the second race by over 5:26 minutes, bringing the America's Cup back to the USA.

The central hull is 90 feet long measured at the waterline . The outside swimmers are significantly longer, but their waterline only touches the water in the front part of the measurement. These differences led to legal disputes over compliance with the surveying regulations in the run-up to the America's Cup.

The USA is very light for its size as it was built almost entirely from carbon fiber reinforced plastic . In addition to the usual sails, she has a rigid sail made of carbon fiber and kevlar , the wing sail , which is based on a two-part, individually trimmable airfoil , similar to an airplane wing. The foresail is driven on a jib boom instead of the bow . Initially, two rigging was carried out in parallel: a conventional sail and a fixed wing. After a mast break in autumn 2009, the team decided to only develop the wing further. The rear part of the wing consists of individually adjustable segments - this means that an optimally curved surface can be set for maximum propulsion for every wind. Since the wing cannot be reduced in size even when it is not in use (e.g. when anchoring in the evening), the ship must remain manned at all times, even during breaks.

Motorized winches are used on this yacht - the men to operate the hand cranks (grinders) are no longer necessary. In addition to saving weight, sailing maneuvers can now be carried out more quickly.

Despite its width, the trimaran is so light and the mast so high (up to 55 m, i.e. twice the hull length) that if it is wrongly sailed it can capsize at a wind speed of around ten knots . When the wind conditions are good, the center hull comes out of the water and the trimaran only sails on the leeward arm. Instead of the ten knots usual with keelboat yachts, a top speed of up to 40 knots (74 km / h) can be achieved in previous America's Cup races. In the second race against Alinghi 5, the USA achieved a top speed of over 33 knots - up to three times the wind speed .

The trimaran was developed by the BMW Oracle Racing Design Team of 30 designers and engineers under the direction of Mike Drummond. The lead shipbuilding architects were Van Peteghem and Lauriot Prévost (VPLP Yacht Design). The hull was built from carbon composites by Core Builders in Anacortes in 150,000 man hours. The mast was built by Hall Spars in Bristol, Rhode Island and Core Builders in Anacortes.

To optimize the trimaran, sensors record 26,500 data per second during test drives.