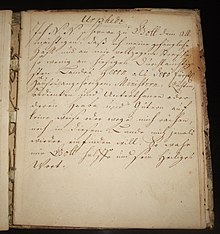 Urfehden formula, handwritten entry in a Mecklenburg chancellery from the 17th century

The Urfehde (also Urphed, Urphede , Urpfedt, Unfehde ) was a means of premodern law and meant renunciation of the sworn feud . The breach of the original feud was therefore prosecuted and punished as perjury .

If a criminal was forced by a feud to conclude an atonement agreement with the injured party, and later also with church and state authorities, then the injured party or the leader of the feud promised to stop the violent measures and to keep the peace in the future. This form of the original feud was called a dispute feud .

The original feud, which itself went through various stages of its development and was part of the emergence of public criminal law, can be documented for the first time in Franconian times in the Fredegar Chronicle or in the writings of Gregor von Tours . It is based on the blood vendetta of the Germanic peoples , in which the dispute was settled by an oath contract.

With the emergence of state courts in the late Middle Ages , the original feud became an affidavit not to seek revenge on the prosecutors because of an investigation, indictment or punishment to be executed, the so-called detention feud . In particular, the original feud comprised the promise of a released and expelled arrested man not to re-enter the country from which he was expelled and not to take revenge on its inhabitants. On the one hand, the original feud complemented criminal prosecution as an additional instrument, but on the other hand, it was also pronounced as a punishment and, as an instrument of grace in medieval law, took on a similar function to the suspended sentences of modern jurisprudence.

Original feuds were very common in the late Middle Ages and early modern times . Almost all of the detainees were punished and released only with a documented original feud. However, this also had constitutional significance for the Holy Roman Empire , as the original feud often prohibited the oath-taking person from being allowed to appeal to the courts of the empire. For this reason, only the old original feud was recognized as a valid legal instrument in the court order for the Reich Chamber of Commerce from 1555.