The Valles Marineris got their name in honor of the Mariner 9 probe , on whose photographic images they were discovered.

At the end of 2021, ESA announced that it had discovered large water deposits at the Valles Marineris one meter below the surface of Mars with the ExoMars Trace Gas Orbiter . 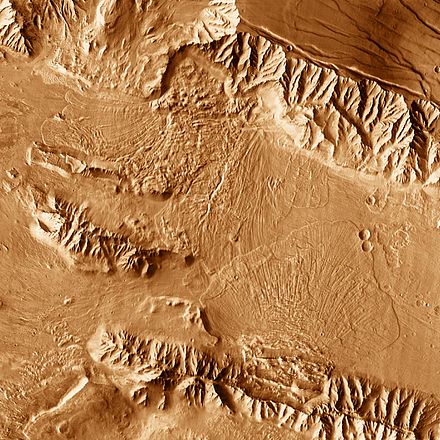 Deposited landslides : Ophir Labes in the upper left and Coprates Labes in the lower right. The image has a resolution of 100 m and shows a section near the transition from Melas Chasma to Coprates Chasma.

The rift system extends from its branch Noctis Labyrinthus on the Tharsis bulge in the west to the "chaotic areas" of Eos Chasma and Capri Chasma in the east. The Valles Marineris consist of several interconnected Chasmata or rift valleys , each of which exceeds the Grand Canyon (Arizona) many times over.

Over time there have been many different theories about formations such as the Valles Marineris. Before powerful telescopes or the Viking probes made more precise observations possible, it was assumed, among other things. Canals built by hypothetical Martians to irrigate their planet. This speculation was fueled by discoveries such as Schiaparelli's "Canali" (Mars channels) or other linear representations. In addition, the designation "Canali" (Italian for channels ) led to the wrong translation Kanal (or English Channel or Canal ).

In the 1970s one suspected inter alia. severe erosion from water released from the permafrost. However, liquid water is extremely unlikely on Mars, as the temperature on Mars rarely exceeds 0 ° C , even at the equator , and Mars has a very thin atmosphere (only 0.75% of the earth's atmospheric pressure ). In 1972 McCauley hypothesized that the rift system could have been created by sinking magma below the surface. In 1989 Tanaka and Golombek published a theory about the origin of tension caused by breaking. Nick Hoffman suspected in 2000 and after that Mars was not shaped by water, but by carbon dioxide in its early days, which is why he used the term "White Mars" for it. Hoffman postulated "cryoclastic currents", a mixture of gaseous and solid carbon dioxide, water ice and rock, which z. B. would have formed the Valles Marineris. Another theory postulates the formation of large dikes - on Earth, the plate-like, mostly far-reaching rock bodies are made of igneous rock, which fill larger crevices and cut or cross the surrounding rock. Magma rises through crevices in the Martian crust, melting the ice in the ground, creating large, rapidly draining masses of water.

The most widely accepted hypothesis currently (2005) is that the rift system was created by cracks in the crust and that it was greatly expanded by erosion and collapse. The reason for this is the development of the Tharsis region .

Rockslides deposited rocks at the bottom of the Valles Marineris, widening them. Possible triggers for rockslides are earthquakes caused by tectonic activities or impact events. It has been observed that the rock that has slipped off is shaped by the wind and forms, for example, dune fields.