The Association of Former Geisenheimers (short form: VEG, since 2002 with the addition Geisenheim Alumni Association ) is one of the oldest and largest alumni associations in Germany. It was created in 1894 at what was then the Royal Prussian Institute for Fruit and Wine Growing in Geisenheim and has around 2800 members worldwide. The members of this alumni association come from the fields of viticulture , horticulture , landscape architecture and beverage technology. Since the founding of the Wiesbaden University of Applied Sciences in 1971 and the takeover of studies from the Geisenheim Research Institute, they have graduated from today's Geisenheim University (until 2009 Wiesbaden University of Applied Sciences).

Central administration building of the research institute. Recording from the time VEG was founded

In 1872, by decree of the Prussian King Wilhelm I, the Royal Prussian Institute for Fruit and Wine Growing was founded in Geisenheim in the Rheingau . In the founding year, six students , initially referred to as Eleven , began a four to six semester course in horticulture and viticulture.

The suggestion to found an association of former students came from the first director of the research institute at the time, Ökonomierat Rudolf Goethe . In the founding protocol of the association of May 13, 1894, the following main objectives were defined: the connection function between the university and its graduates, the placement of technically suitable positions with appropriate salaries and the professional development of the graduates.

The Association of Former Geisenheimers quickly enjoyed great popularity. From 1896 a regularly published newsletter for the members, the Miveg (Mitteilungen VEG), appeared. As part of the 25th anniversary of the research institute in 1897, it merged with what was then a second student association that existed alongside the VEG.

First Congress of the Association of Former Geisenheimers in 1908

Even before the First World War , from September 26 to 28, 1908, the First Congress of the former Geisenheimers took place at the research institute, which according to contemporary reports attracted a large number of visitors . After the First World War, which interrupted the activities of the VEG, the association was actively involved in the restructuring of the curricula at the Geisenheim teaching and research institute.

In the 1930s, VEG also incorporated the previously independent association into the NS student union and, from 1938, the ban on the previously published Miveg newsletter . Together with the old gentlemen's associations of the Geisenheim corporations , a group of the Upper Viticulture and Horticulture School Geisenheim was formed, which was later renamed OTTO BÖCKEL .

In 1947 VEG resumed its work on the occasion of the 75th anniversary of the Geisenheim Research Institute. A re-establishment of the Association of Former Geisenheimers with new statutes took place on February 14, 1948. Due to the increasing importance of the VEG's involvement in helping to shape teaching and study content at the Geisenheim teaching and research institute, a training committee was founded in 1952. From 1958, multi-day symposium events were introduced in Geisenheim. In the next decades, VEG was involved in all important decisions regarding the study program in Geisenheim. For example, when the six-semester engineering course was introduced in 1960, the company was just as active in an advisory capacity as it was later, in 1971, when the Wiesbaden University of Applied Sciences with its green departments was founded in Geisenheim in cooperation with the Geisenheim Research Institute.

In 1972, the Müller-Thurgau Prize of the Association of Former Geisenheimers was awarded for the first time. In 1994 VEG celebrated its 100th anniversary. In 2008 VEG founded Campus Geisenheim GmbH together with the Wiesbaden University of Applied Sciences and the Society for the Promotion of the Geisenheim Research Center (GFFG). The Association of Former Geisenheimers currently represents 2,300 members worldwide (as of December 2010). Of these, around 75% are graduates in the fields of viticulture and beverage technology and 25% in the fields of horticulture and landscape architecture. 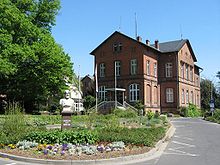 The Association of Former Geisenheimers has also opened up in the course of the establishment of the Alumni idea coming from the Anglo-American region in Germany . For more than 100 years, members were almost exclusively former students and graduates, but in recent years the company has become more and more open to other interested groups.

The VEG now sees itself as an overarching association of former students from all Geisenheim departments and their courses, the professors and employees of the RheinMain University of Applied Sciences, Geisenheim Department, and Geisenheim Research Institute, as well as all people who feel connected to Geisenheim as a study and research location. This was documented at the beginning of the 21st century with the official name affix Geisenheim Alumni Association .

VEG is managed by a board of directors. This currently consists of 10 members with different functions and subject areas. The VEG is represented in the sense of §26 BGB by a President and two Vice-Presidents, one of the Vice-Presidents being the President of the Association of German Oenologists.

In addition to the board members, the extended board of VEG also includes the president of the Geisenheim University of Applied Sciences and a student representative.

According to the current statutes of the association, VEG pursues a number of goals. This includes the implementation of scientific events and conferences, the promotion of further training and the publication of communications. In the course of studies, the VEG is active in supporting the students through information and advice as well as in liaising with the students of the Geisenheim study location of the Wiesbaden University of Applied Sciences by including the student's spokesman on the extended board of VEG.

In addition, the VEG is dedicated to maintaining relationships with similar associations of other universities, research institutes and professional institutions. The promotion of teaching as well as the transfer of technology and knowledge in the Geisenheim study location is achieved, among other things, by appointing a representative to the Board of Trustees of the Geisenheim Research Institute. VEG is also a member of alumni-clubs.net, the overarching umbrella organization of the alumni associations in German-speaking countries. In 2003, VEG took over the organization of the annual congress of this umbrella organization in Geisenheim.

Alumni marketing, which is becoming increasingly important, was previously carried out directly by VEG. From 2008 this is the task of the newly founded Campus Geisenheim GmbH, of which VEG is a partner.

In 1972 the Professor Müller-Thurgau Prize sponsored by VEG was awarded for the first time. Prize winners are people who have rendered outstanding services to VEG and its concerns as well as to Geisenheim as a research and study location in general. The first award winner in 1972 was Hugo Schanderl . In addition, VEG has been awarding a media prize on a regular basis since 2006. In the horticulture course, the best scientific poster within the project study will be awarded. VEG also awards honorary memberships at irregular intervals for particularly outstanding services to VEG and the Geisenheim study location. Honorary members are Werner Hoffmann , Clemens Klockner and Klaus Schaller, who were director of the Geisenheim Research Station until March 2008.

After the VEG-Mitteilungsblatt Miveg appeared from 1897 to 1963, there was no longer an independent VEG communication organ for almost 40 years. For this purpose, appropriate possibilities of various media of the profession were used. In 2000 VEG published its own magazine for the first time, Geisenheim Alumni . In 2007, the magazine was renamed Campus Geisenheim - the magazine for the research and study location Geisenheim , and in 2010 it was renamed the campus magazine - the magazine for the research and study location Geisenheim . This magazine, which is published with the participation of VEG and in collaboration with other institutions on the Geisenheim campus, was published four times a year until 2012 with a volume of 40–60 pages per issue. From the end of 2014, VEG will participate in content and financially in a new joint print medium with the Geisenheim University called "PlanG". This has a volume of around 40 pages and appears quarterly and is sent to every VEG member by post.