Villa Dionysos ( Greek Βίλλα του Διονύσου ) is the largest Roman building in Knossos , which at that time was called Colonia Iulia Nobilis Cnossus . The ruins of the villa are located on the eastern slope of the Acropolis of Knossos, which is also called Fortetsa, about 600 m northwest of the prehistoric palace. 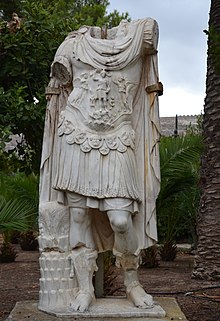 Headless statue of the Emperor Hadrian

At the point where the villa was later built, there were already residential houses during the Protogeometric period . The building was erected in the 1st century. In the 2nd century, during the Antonine period , the villa was redesigned twice. A first time around the middle of the 2nd century and a second time towards the end of this century. The rooms were covered with marble and the floors were decorated with mosaics of Apollinaris. Around 200 the Villa Dionysus was destroyed by an earthquake . It was then partially rebuilt until it was finally abandoned between 225 and 250.

In April 1935, workers were planting grapevines and discovered a headless statue of Emperor Hadrian . It was located in a pit dug through a Roman mosaic. RW Hutchinson, the curator of Knossos, discovered another mosaic and finally other parts of the Villa Dionysus while searching for the lost head. The British School at Rome was entrusted with further excavations and in 1937 the archaeologist Courtenay Arthur Ralegh Radford visited the site and planned the next steps. However, the outbreak of World War II prevented further investigations. Many records disappeared during the war, and the Austro-German Major General Julius Ringel had a marble statue of a muse brought to Austria . Michael Gough resumed exploration and discovered the great western area and further areas in the south in 1957, 1958, 1961 and 1971. Gough died in 1973, and his wife Mary Gough was able to summarize his excavation results by 1991. As early as 1983, John W. Hayes published the found pottery. From April 1997, the archaeologist Sara Paton completely exposed the villa and preserved the mosaics by erecting roofs.