The Villa Miseria in Ingeniero Budge 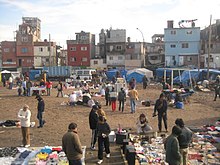 As Villa Miseria (German: Elends-Siedlung) informal settlements / marginal settlements of Argentina are called, which are often in the outskirts of the big cities. The official name is euphemistically Villa de emergencia (German: Not-Siedlung). Rosario has the highest proportion of marginal settlement residents among Argentina's metropolises with around 13%, but around 5–10% of the population also live in these settlements in Buenos Aires and Córdoba . In terms of both the size of the settlements and the level of crime, they are not comparable to the favelas in Brazil. The largest Villa Miseria ( Villa 31 in Buenos Aires) had about 26,000 inhabitants in 2009; there are also several more, each with more than 10,000 inhabitants ( La Cava in the San Isidro district and Villa La Tela in Córdoba ).

For decades the government has made efforts to improve the situation in Villas Miserias. Settlements located in floodplains are often relocated to social housing areas. In more favorably located districts, the so-called Programa de Mejoramiento de Barrios (German program for the improvement of neighborhoods ; Promeba ) based on the Brazilian model, legalized land ownership and improved the infrastructure (electricity, drinking water, sanitary facilities).

The largest resettlement project Rosario Hábitat has been carried out in Rosario since 2001 in several stages . There, more than 40,000 social housing units are being built in several stages to eliminate the problem of sluming; the first phase, around half of which has been completed so far, comprises 7,000 apartments. Around 10,000 apartments were also built in Córdoba ( Programa Nuevos Barrios ), reducing the number of slums by more than a third.

During the military dictatorships of the 1960s and 1970s , many slums, especially around Buenos Aires , were forcibly relocated, often without offering the residents alternatives. One of the reasons was the Football World Cup in 1978 : The aim was to present the guests with an Argentina without poverty. Large numbers of people were killed in these resettlement operations, either as a result of systematic murder or the circumstances surrounding such resettlement operations.