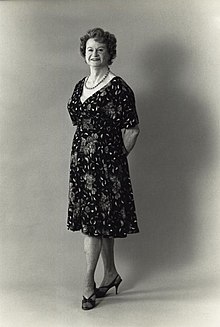 Virginia Charles Prince (born November 23, 1912 in Los Angeles ; † May 2, 2009 ibid) was an American transgender activist who published the magazine Transvestia from 1960 to 1980 and the society “Society for the Second Self for male heterosexual cross-dressers ”. She also wrote under the pen name Virginia Bruce .

Prince was born Arnold Lowman on November 23, 1912, the son of a surgeon and real estate investor in Los Angeles, in a "socially prominent" environment. Prince first began putting on her mother's clothes at the age of 12. During her visit to high school, she intensified this and went public. In doing so, she found that as a young woman she could move around without problems and without being recognized (see also Passing ). This culminated in the fact that at the age of 18 she was not only able to attend a church Halloween party dressed as a woman, but even won the award for best appearance. This marked "... the first opportunity on which Prince was perceived as a girl in front of others ...".

Prince did not yet live out her disposition to transvestism openly and permanently, as she did later. However, thanks to the help of a psychologist whom she consulted at the age of 30, this changed significantly. Despite an earlier diagnosis of an unresolved Oedipus conflict , she confided to the doctor that she is very fond of women's clothing. His answer was short and clear: "... learn to accept yourself for who you are and enjoy it." Prince paid tribute to this psychologist, who pointed out that there are many others who have a similar "problem" , later by making his liberating assessment a recurring and determining topic in her magazine Transvestia , which appeared in 1960 . However, she initially continued to appear in public primarily as a man.

Prince received her Ph.D. in Pharmacy (see also Doctor of Pharmacy ) in 1939 from the University of California ( San Francisco ). During this time she also met her wife, whom she married in 1941 and with whom she had a son. However, the marriage failed after seven years "... because of transvestism". The news that Prince was getting divorced because of her transvestite tendencies shocked her socially respected family circle. This threatened to destroy her financially and socially (“to disown her both financially and socially”) if she did not ensure that this would not be made public. However, the news finally reached the media.

After the marriage was divorced, Prince returned to university and began working as a pharmacological research assistant and lecturer. She took the opportunity to devour the (small) selection of medical literature that was available at college on transvestism. It was also around the time that Prince began using the Charles Prince name to disguise her origins from a well-known family. The name is made up of her father's first name and her home address on Prince Street. The exact time at which Prince took the first name Virginia is unknown, but one of her first publications with the name Homosexuality, Transvestism and Transsexualism: Reflections on Their Etiology and Difference, published in 1957, is already marked with "CV Prince".

Some editions of Transvestia. The magazine was produced in a very small format in order to be able to hide the magazine from prying eyes with one hand or pocket insertion.

In 1960 the first issue of her magazine Transvestia appeared. For start-up funding, Prince found 25 donors who gave four dollars each. With this $ 100 she produced the first edition under the publisher's name Chevalier Publication and sold it to subscribers and bookstores with adult literature.

From then on, Transvestia was published every two months until 1980 and, under Prince's direction, had 100 issues in those twenty years. The follow-up issues that were subsequently published between 1980 and 1986 were designed by Carol Beecroft (the second owner of the publisher). 1963 appeared blurb " dedicated to the needs of the sexually normal individual who has discovered the existance of his or her 'other side' and seeks to express it. ”(“ Dedicated to the needs of a sexually normal developed individual who has discovered the existence of his or her 'other side' and is looking for a way to live it out. ”) Instead of relying on a team of professional writers, the magazine should“ benefit from his Readers “written while Virginia Prince was tasked with sifting and organizing the submissions.

Over the years there have also been readers from abroad, mainly from England, Scandinavia and Australia. Prince wrote a lengthy autobiographical article in the 100th and final issue of Transvestia in 1979. This issue was exceptional in that it was all about Prince becoming, life, divorce, and working on Transvestia .

The magazine was geared towards three goals: “To give expression to those who are interested in unusual clothing and fashion; To have information ready for those who criticize ['condemn'] what they do not understand; Providing education to those who see evil where there is none. ”These three orientations, as well as entertainment and other articles, are designed to“ enable readers to be empowered with their self-acceptance and peace of mind Find". Transvestia consisted of true and fictional stories submitted by readers, medical or psychological knowledge articles, as well as personal experiences of the various phases of the respective woman's becoming. Furthermore, a question and answer area, a section only for wives, who should be encouraged to share their experiences and assessments of the crossdressing behavior of their partners, letters to the editor and, for reasons of a clean layout, small messages have been added to the free areas above, below or next to the articles, Jokes, cartoons and poems inserted. Due to the almost exclusively reader contributions, Transvestia was one of the earliest works of a crowdsourced publication.

Although the magazine was published without interruption for 20 years, it was not a lucky star at the beginning. Prince remembers in her autobiography that the first editions could hardly be financed, also because the expensive process of mimeography had to be used for printing. In the end, however, she found a printing company that could produce the booklets more cheaply using offset , and Transvestia was still an economic success.

The readership consisted largely of men, because only they with their transvestite tendencies were rejected by society or at least had great difficulty in living out their passion. Transvestia turned to them primarily because, unlike them, women dressed in opposite sexes were not so much subject to social criticism.

One of the authors of Transvestia was Susanna "Tito" Valenti, who owned a New York country hotel called Casa Susanna . At the beginning of the 1960s, a number of transvestites were guests there, who were able to live out their disposition undisturbed. Prince was also a guest there.

Through her many publications, Virginia Prince became one of the pioneers of the transgender movement. Her long list of literature revolving around crossdressing and transvestism was rooted in her desire to stand up against intolerance and social rejection of sexual diversity. Noteworthy was her, in her 1967 publication “The Expression of Femininity in the Male” (in German, for example: “The expression of femininity in the male”, under her pseudonym Virginia Bruce ), strict rejection of the assumption widespread at the time that real (“True”) transvestites are mentally disturbed.

In other works, Prince helped the term transgender gain popularity:

“Virginia Prince [...] coined the transgender term in the USA in the 1970s. She lived as a woman without having her 'male' body operatively altered and found her way of life not represented by the term 'transvestite' nor that of the 'preoperative transsexuals'. With the self-designation 'Transgenderist' she distinguished herself from the pathologization through the medical-psychiatric discourse: 'We ain't broken - so stop trying to fix us!' "

Prince also insisted that transvestism is very much linked to gender, as opposed to sex or sexuality. Her use of the word "femmiphile" refers to the assumption that the term "transvestite" is meanwhile meaningless, and that she was able to emphasize the difference to heterosexual crossdressers who dress feminine because they want to express femininity in themselves. In contrast to homosexuals or transsexuals, who, according to their interpretation, do so for other reasons.

Although Prince was aware of the term androgyny (as she wrote in her autobiography in the 100th edition of Transvestia, "... to live her own thing, whatever it is ..."), she preferred the term gynandric . This is because, she explained, “Charles still resides in her, but […] the feminine is more important to [her] than the masculine.” Prince's idea of ​​a “true transvestite” should be clearly separated from the gay and transsexual because the true transvestites "are exclusively heterosexual" and "a transvestite's values ​​are his male organs which he uses with relish ['enjoys using them'] and has no desire to remove them."

At the beginning of the 1970s, the transgender scene, gays and parts of the women's movement criticized Prince's approaches to crossdressing and transvestism. Likewise, their favorable views on conventional marriage and a traditional understanding of family were controversial, as well as their definition of traditional, stereotypical gender roles. In addition, her attempt to exclude transsexuals , homosexuals or fetishists from their efforts to bring crossdressing into society was also sharply criticized.