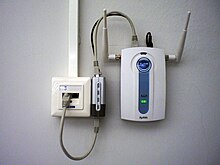 A wireless access point can also be used in the so-called ad-hoc mode (not to be confused with ad-hoc networks that work without a wireless access point) as a central interface between several end devices. In this way, devices such as computers and printers can be connected wirelessly.

Wireless access points mainly perform the same tasks as bridges and switches : They connect different devices with each other on a hardware level. On the one hand, they avoid data collisions using techniques such as CSMA / CA and, on the other hand, they bridge differences between different transmission media .

WLAN routers are devices made up of a router with an integrated wireless access point. By providing functions such as routing , packet filters and DHCP servers , these devices also affect higher layers of the model.

A radio network name ( ESSID ) is assigned to a radio network based on the IEEE standard 802.11 . Clients can use the ESSID to distinguish between different networks. An access point can now regularly send data packets with the ESSID (and other wireless LAN data ) via broadcast telegram so that clients can identify an existing network.

A key distinguishing feature of 802.11 base stations is which operating modes they support: Some access points can establish connections to other access points and clients at the same time.

Some access points can be operated in client mode - in the sense of this article, however, they are no longer access points, but functionally wireless adapters : Such reconfigured access points are useful when a client (PC, printer, etc.) only has an Ethernet connection and is to be integrated wirelessly into the LAN via an access point.

Not every product supports all operating modes. Not every access point has a socket for the simple connection of an external antenna.

In Extended Service Set mode: There is often a problem with the compatibility of base stations from different manufacturers. If these are to be connected to a common network and roaming between the individual APs is to be enabled, the devices must exchange information via the logged-in clients. A network protocol is required for this, but the IEEE 802.11f standard was only adopted with a time lag . In the meantime, many manufacturers had already created their own incompatible solutions.

Point-to-Point or Multipoint: Since the WDS used is not a recognized standard, devices from the same manufacturer should be used, at least devices with the same chipset.

Problems are reported with individual WLAN cards or drivers that cannot communicate using repeaters. The buyer should therefore research in advance in the usual internet forums and on the manufacturer's website whether there have already been successes or failures for the combination of the respective products.

There is software that enables a WLAN-enabled computer (PC, laptop, smartphone, etc.) to work as an access point. With Mac OS X on Apple Macintosh computers, this capability (see also tethering ) is already implemented in the operating system, but without compatibility with WPA or WPA2-protected networks (status: Lion).

The software solution also has disadvantages: the WLAN cards rarely have a connection for an external antenna, and a PC has far greater power, cooling and space requirements than a hardware-based access point.