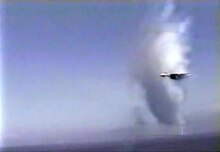 The cloud disk effect (also called Prandtl-Glauert condensation cloud , after Ludwig Prandtl and Hermann Glauert ) is the appearance of a cloud of water mist with the characteristic shape of a flat cone around missiles that move at supersonic speed . Similar phenomena can also occur at high subsonic speeds if local currents on the missile reach the speed of sound .

A similar effect also occurs with explosions ; the phenomenon is then referred to as a Wilson cloud .

The cloud disk consists of water droplets; the phenomenon follows the front of the shock wave . The shock wave is an abrupt change in pressure that causes a temporary cooling ( adiabatic change in state ) of the air in front of you and causes immediate condensation of the air humidity : Tiny water droplets form in the area and form a large cloud that surrounds the dome-like shock wave. As the temperature of the air humidity falls far below the dew point, the water vapor condenses as a mist. After the shock wave and the negative pressure zone have passed through, the pressure and thus the temperature return to normal, so that the particularly fine mist droplets evaporate again almost immediately, i.e. the mist dissolves again.

In the case of missiles, the cloud disc appears to accompany the missile. In fact, this applies to the spatial fog zone , but the air masses and fog droplets involved are constantly new. 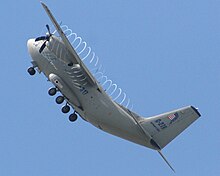 Condensation effect on the propeller tips of a C-27J "Spartan"

Aerial view of the Baker nuclear explosion, Operation Crossroads in Bikini Atoll on July 25, 1946 with a spherical Wilson cloud

Similar phenomena can also be observed , for example, at the propeller tips of an aircraft and during pressure waves from explosions ("Wilson cloud").