One of the pyramids on the upper terrace of Yaxchilán

Yaxchilán is a historic Mayan city ​​on the Usumacinta River in what is now the Mexican state of Chiapas . The town's historical name was likely Pa 'Chan .

Yaxchilán is known for the large number of sculptures found there.

The current name Yaxchilán ("Green Stones") was given to the Maya city at the end of the 19th century by the German-Austrian archaeologist Teobert Maler . Other suggestions for names that did not succeed were Lorillard Ville by Désiré Charnay in honor of the researcher Pierre Lorillard and Menché [ menˈtʃe ] by Alfred Maudslay .

In the course of deciphering the Maya hieroglyphs , the original name of the place was searched for and a glyph was identified as the city's emblem, which according to Simon Martin and Nikolai Grube was initially called Siyaj Chan (“born in heaven”, nacido en el cielo or “born heaven “, Cielo nacido ) was read. According to a publication by Martin from 2004, however, the glyph can be read as Pa 'Chan [ paʔ tʃan ] ("Heaven divided," cielo partido ).

Bird sacrifice by Lacandons on a cult stone in the form of a god's head, Yaxchilán, August 1999. Photograph by Reinhard Krüger

The city of Yaxchilán is located in a bend in the river on the Usumacinta River, not far from the border between Mexico and Guatemala, and is thus bounded on three sides by a river.

For a long time there was no road closer than 100 miles to the city. The only way to get to Yaxchilán was to travel hundreds of miles by river or by plane. It was only when Mexico expanded the road along the border with Guatemala in the early 1990s that the city was opened up for tourism. Now it is at least possible to reach the city by taking a one-hour boat trip on the Usumacinta .

Yaxchilán was an important city during the Classical period and the dominant power in the Usumacinta region. The city ruled over other smaller cities such as Bonampak and was allied with Piedras Negras for a long time and, at least for a short time, with Tikal . Yat-Balam, founder of a long ruling dynasty, took the throne on August 2nd, 320, when Yaxchilán was still an insignificant city. Under the rule of his successors, the city-state grew into the capital of the region. She waged war with the rival city of Palenque in 654. The dynasty lasted until the early 9th century. Yaxchilán had its greatest power during the long reign of King Shield-Jaguar II , who died in 742 at the age of 90. 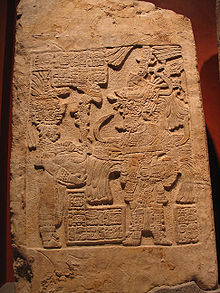 The first known modern mention of the city is found in a statement by Juan Galindo in 1833. Professor Edwin Rockstoh of the Guatemalan National University visited the city in 1881 and published a brief report. The explorers Alfred Maudslay and Désiré Charnay visited the city only days in a row in 1882 and published more detailed reports on the ruins with drawings and photographs. Teoberto Maler visited Yaxchilán repeatedly from 1897 to 1900 and in 1903 wrote a documentary about the city and other nearby places.

After the Mexican government had the ruins guarded from 1927, Sylvanus Morley led an expedition of the Carnegie Institution to Yaxchilán in 1931, which measured the city and discovered other monuments. Tatiana Avenirovna Proskouriakoff , who deciphered the inscriptions of Yaxchilán, made an important breakthrough in the study of the dynasties of the classical Maya period in 1963 and 1964 , who worked out the dynastic history of the city.

The Mexican National Institute for Anthropology and History (INAH) carried out an archaeological study in the city from 1972 to 1973 and again in 1983. Further excavations took place in the early 1990s. Recently, however, Yaxchilán is threatened by a planned dam.