Bonampak is a Mayan ruined city in southeastern Mexico , famous for its well-preserved murals. The name Bonampak means "painted wall" in Maya and was given to the place by the researcher Sylvanus Morley . It is a Maya center of rather minor importance. The wall paintings , however, are almost unique in the Maya region and are among the outstanding works of art of the late Classical period (approx. 600–900) in pre-Columbian America. The moving representation, which clearly stands out from the static representations that dominate stone monuments, is particularly outstanding.

Bonampak is located on a tributary of the Río Usumacinta in Mexico in the mountainous jungle of the Mexican state Chiapas in the so-called " Selva Lacandona " near the border with Guatemala , around 30 km south of the Mayan site of Yaxchilán at an altitude of around 350  m . 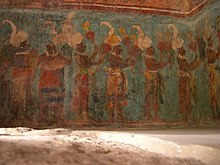 Bonampak was probably founded around the year 500; However, it soon came under the politico-military control of Yaxchilán. At first the city was involved in constant battles with the overpowering rival; later the situation calmed down. Bonampak reached its peak around the year 800, but a few decades later the site was abandoned by the Maya. In later times the Lacandon Indians used the site again as a cult center. It was rediscovered by Western researchers in 1946, but extensive excavation work was not carried out until 1993 to 1997.

The wall paintings are located in Temple 1, the only multi-room building in Bonampak. The frescoes cover an area of ​​144 m² in three rooms. The ruler and his entourage, tribute and war scenes, a criminal court, dance scenes and blood sacrifices by nobles are depicted. The frescoes give an insight into the social fabric of Mayan society of the Middle and Late Classical periods. In terms of content, they can be divided into five scenic groups:

Temple 1 was built around the year 790 under the ruler Chan Muan, who came to power in 776. Bonampak had close relationships with Lacanhá and Yaxchilán in his day , who are also documented as allies in both the frescoes and the stelae .

A reconstruction of the main temple of Bonampak with the paintings is in the National Museum of Anthropology in Mexico City .