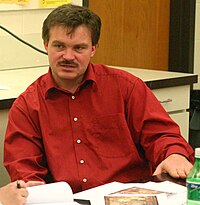 Nikolai Grube at the Mayan meeting in 1994

Nikolai K. Grube (born June 6, 1962 in Bonn ) is a German ancient Americanist and author who works primarily in the field of Mayan research and especially Mayan inscriptions .

Nikolai Grube was fascinated by archeology from an early age; already in his school days he published his first work on the Maya . He studied ancient American studies , ethnology , ancient oriental studies and indology at the University of Hamburg . There he completed his doctorate in 1989, after which he moved to Bonn. Together with the Roemer and Pelizaeus Museum in Hildesheim , he organized the international exhibition Die Welt der Maya , which took place in Hildesheim, Vienna, Mannheim and Cologne. From 1992 to 1995 he received a habilitation grant from the German Research Foundation (DFG) for the Orale Traditions der Cruzoob -Maya project in Mexico , where he also had the opportunity to take part in various research projects in Guatemala , Mexico, Belize and Honduras . In 1999 he completed his habilitation in ethnology, again in Bonn, and in the same year he received a Heisenberg grant from the DFG. From 2000 to 2004 he held the Linda and David Schele Chair at the University of Texas at Austin . His main research interests were the emergence of early states and writing systems in pre-Hispanic Mesoamerica , the ethnolinguistics of the Maya languages and the cultural revitalization movements of Indian groups. In April 2004, Grube took up the C4 professorship for Ancient American Studies and Ethnology at the Rheinische Friedrich-Wilhelms University in Bonn , succeeding Hanns Jürgen Prem as managing director of the Institute for Ancient American Studies and Ethnology (IAE) (now the Department of Ancient American Studies ).

Nikolai Grube's research regularly takes him to the areas of the Maya and other Indian cultures in Central America. He pays a lot of attention to the relationship between the Maya and Teotihuacáns cultures , the competition between Tikal and Calakmul at the end of the classical Maya period, but also to the later history of the Maya and their present.

Since 2014, Grube has been the project manager of the “ Text database and dictionary of Classical Maya ” project, which researches the script and language of pre-Hispanic Mayan culture. It was established in 2014 by the North Rhine-Westphalian Academy of Sciences and Arts at the Friedrich-Wilhelms-Universität Bonn and has a term of 15 years.