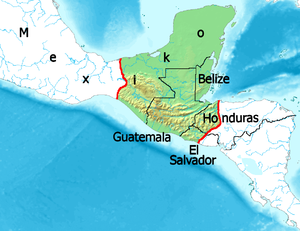 Former settlement area of ​​the Maya

The Mayan or Maya languages form a language family in the Mesoamerican cultural area and are spoken by the Maya in Central America .

A distinction must be made between the historical Mayan language, which is known, for example, from the inscriptions of the Mayan ruins (see Mayan script ), and the current Mayan languages ​​that still exist today, which are from the descendants of the former Mayan civilization in Guatemala , Southeast Mexico , Belize, and West Honduras are spoken.

The Maya do not speak a homogeneous language, but different Maya languages ​​(for example the Mayathan on the Yucatán peninsula or the Kekchí in Guatemala) that belong to a common language family . All of these individual languages ​​can be traced back to an original form of the Maya language, the Proto-Maya , which was the basis for the later development of the individual branches and subgroups around 4,000 years ago. Similar to, for example, European languages, regional “Maya dialects” developed here, some of which are very similar to one another, but can also be very different in some respects. The language family was split into the two main branches of the lowland Maya (e.g. Mayathan) and the highland Maya (e.g. Quiché , Cakchiquel and Kekchí in Guatemala ) a long time ago. Even before the Conquista , there were many different Mayan languages ​​from which today's variants developed. An early form of Chol and Mayathan was spoken at the height of the Mayan civilization .

The Maya languages ​​are ergative languages and follow the ergative-absolute pattern, in contrast to the accusative languages (such as German), which follow the nominative-accusative pattern. Since the Maya languages ​​do not have a morphological case on the noun, the respective case of subject and object must necessarily be identified on the verb. Both prefixes and suffixes are used to indicate grammatical function . In some of the Maya languages ​​there is also (similar to Quechua ) a distinction between the word we , depending on whether the person addressed is included in the group or not (e.g. I + he + she + you versus I + he + her without you).

Exact local names must e.g. B. in the Tzeltal language with the directions "upwards", "downwards" and "across to it" as well as with a variety of descriptive expressions. For example, if you want to say that one object is on top of another, you have to say: one object is behind the other . In Kaqchikel, the word “inside” must be expressed with “chi rupam” (= “mouth-to-be-belly”). Or “ti'na” means “door” in Tzotzil and is expressed literally as “house-mouth”. 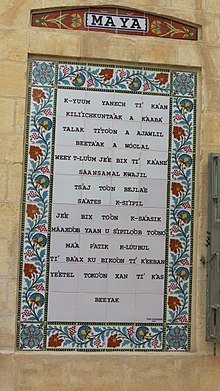 Text example: The Lord's Prayer on Mayathan in the Church of the Pater Noster to Jerusalem

The uvular plosive [q] or [q '] has become a velar [k] or [k'] in the Maya languages ​​of Yucatán and Chiapas (e.g. Mayathan and Chol ) while it was in the highlands -Maya languages ​​such as B. Quiché, Cakchiquel and Kekchí is preserved. In Mayathan it coincides with [k] or [k '] , while in Chol the original [k] is shifted to [ʧ] ("ch").

Classification of the current Mayan languages

The division of the individual Maya languages ​​still spoken today into certain language groups and language families does not take place uniformly in the literature and is made differently by different linguists.

Classification according to Terrence Kaufman and Lyle Campbell

Classification according to SIL International

There are a total of 69 Maya languages ​​in the SIL classification that can be assigned to the different language groups. The number of speakers refers to surveys that mostly come from the last 15 years and can therefore only be regarded as approximate values. When naming the individual languages, a geographical classification was usually made, which is why many languages ​​were named after the places, regions or cardinal points in which they occur. The codes listed are the official SIL codes of the respective languages.

The "National Commission for the Development of Indigenous Peoples" of Mexico (CDI) listed the following 17 Maya languages among the 62 indigenous languages ​​of Mexico recognized as "national languages " in 2000 : Maya of Yucatán (Maaya t'aan) with 892,723 speakers, Tzotzil (Batsil k'op) with 356,349 speakers, Tzeltal (Bats'i K'op) with 336,448 speakers, Chol (Lak t'an) with 189,599 speakers, Huastekisch (Téenek) with 173,233 speakers, Tojolabal (Tojolab'al, Tojolwinik otik) with 44,531 speakers, Chontal von Tabasco (Yokot t'an) with 43,850 speakers, Kanjobal (Q'anjob'al) with 10,833 speakers, Mam (Qyool) with 8,739 speakers, Chuj with 2,143 speakers, Kekchí (Q'eqchi ' ) with 835 speakers, Lacandon (Hach t'an) with 731 speakers, Jakaltekisch (Abxubal) with 584 speakers, Quiché (K'iche ') with 286 speakers, Cakchiquel (Kaqchikel) with 230 speakers, Ixil with 108 speakers and Aguacateco ( Awakatek) with 27 speakers. The 6 Mayan languages ​​Kanjobal, Mam, Kekchí, Quiché, Cakchiquel and Aguacateco are spoken by immigrants from Guatemala; nevertheless they are recognized as indigenous languages ​​in Mexico. The other 11 Mayan languages ​​are traditionally spoken in today's Mexico, including Yakaltic in Guatemala.