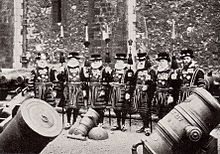 The guards in the tower first appear in documents from the early Tudor period in the late 15th century. There they are portrayed as a tight-knit community that share both duties and rights. From the 16th to the 19th century, the office of Yeoman Warders was hereditary, and a permanent group of people formed. In addition to guard duties, they began doing other paid work early on. The most striking of these was to guide tower visitors through the fortress for a fee and show them attractions like the tower menagerie . Not until Arthur Wellesley, 2nd Duke of Wellington , used his position as constable of the Tower to reform the Yeoman Warders in 1826. Instead of sons of other Yeoman Warders, former NCOs of the Household Cavalry , the Foot Guards or the Infantry of the Line were given the post on the recommendation of their regiment. In 1836 the Master-General of the Ordnance succeeded in enforcing that the Yeoman Warders received a higher salary, but were no longer allowed to charge fees for their own account. The Yeoman Warders had to give up their last privilege in 1923 when they were no longer allowed to sell postcards on their own account.

In fact, they do more ceremonial duties and serve as guides through the Tower these days, making them a tourist attraction in their own right. The tower has been used mainly as a museum since the beginning of the 19th century, and even then the Yeoman Warders served as museum guides who led tourist groups through the various exhibitions.

In 1555 there were 21 Yeoman Warders who had to be male, "trustworthy and discreet," and between 30 and 50 years old. Of these 21, 7 were Chief Yeoman Warders who received higher pay and better housing in the Tower. The office quickly became hereditary and the pay was not adjusted, so that complaints about insufficient pay and poor quality of the guards were frequent as early as the end of the 16th century. Today there are 36 Yeoman Warder posts, all ex- British Army personnel with at least 22 years of active service with good conduct and the rank of sergeant major . The Yeoman Warders have to live in the Tower with their families. As a community, they run the Warders' Hall next to the Byward Tower , which has lounges and meeting rooms.

The Yeoman Warders wear a dark blue tunic with a red collar during normal office hours in the Tower. The uniform was designed by Mrs. Batt and Son of Edmond Street in 1858 and replaced an older model from Tudor times. When the current British ruler visits the Tower or a state ceremony takes place in the Tower, they wear a red and gold uniform that looks very similar to that of the Yeomen of the Guard . The letter combination "E II R" on the uniform stands for " Elizabeth II Regina ", see picture above. During the lifetime of Queen Victoria it was the letters "VR", during the reign of Edward VII. "E VII R" (for Latin Rex ) was on the uniform, under George V. "GVR" and during the reign of George VI according to "G VI R".

The Chief Yeoman Warder every evening at 7 minutes before 22 o'clock to carry out the Ceremony of the Keys at the Tower responsible.

The Scottish Moira Cameron was accepted on January 3, 2007 as the first woman ever to the Beefeatern. She began her service on September 3, 2007. Cameron had joined the army at the age of 20 and outstripped five men in the application process for the position.

The tower has a centuries-long history of reception, with its function as a place of execution and prison in particular has become powerful. The Yeoman Warders appear in most of the related stories, but mostly only play a minor role. The Savoy opera The Yeomen of the Guard by Gilbert and Sullivan , despite its misleading name, is about the Yeoman Warders and the confusion that an upcoming execution will cause in the company.

The name Beefeater has been used since 1700. There are different interpretations of the origin of the term "Beefeater":