The ČSD series M 120.4 is a two-axle motorized multiple unit for regional traffic of the former Czechoslovak State Railways (ČSD) .

It was created after a patent from Hans Ledwinka , who led a whole team of automotive designers on the development of rail buses. They came up with the idea of ​​the tower car, in which a single driver's cab was placed in the middle of the roof of a vehicle. This patent was applied for the first time in 1928 when the previous M 120.3 series was built . The tower railcars were built in a narrow-gauge version as the M 11.0 series for the narrow-gauge railways operated by ČSD .

A total of 89 vehicles of the M 120.4 series were built between 1930 and 1935. These railcars drove with a two-axle CDI 4 sidecar. The basic concept of this series had proven itself and was therefore retained when further series were built until the 1940s.

With the appearance of the class M 131.1 railcars , which had a gearbox that was particularly easy to maintain and operate, they were gradually replaced by these. The last vehicle was probably taken out of service in 1965.

The M 120.417 railcars in the National Technical Museum in Prague and the M 120.485 in the Křimov Railway Museum have been preserved . In the Zdice Railway Museum there is a torso of an M 120.4 that has been converted into a trolley . 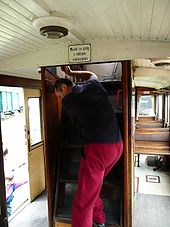 The engine driver leaves the driver's cab of the railcar.

The specialty of this series was the layout of the driver's cab. A swivel seat and the tower with windows on all sides gave the driver a sufficient view to both sides.

The vehicles had a 6-cylinder underfloor petrol engine from the Tatra brand. Tatra diesel engines were later used. The performance of the engine has been increased compared to the predecessor variant M 120.3 by increasing the speed from 73 to 88 kW. The change in the direction of travel of the railcar was achieved by changing the direction of rotation of the engine. For this purpose, a second cam engaged the camshaft by means of a special device. The engine was started by a second starter in the opposite direction of rotation.

The power was transmitted through a mechanical four-speed gearbox. The power was transmitted to the axle through direct intervention of the individual transmission stages via a spur gear bevel gear. This was done in such a way that the gear wheels, which had previously rotated freely without intervention, were braked accordingly by a band brake. There were a total of four speed levels that were set by selecting and shifting one of the four band brakes.

The vehicles took over the service on the numerous local railways of the ČSD and proved themselves in the service at times of low traffic. They were also used on the numerous mountain routes with gradients of up to 43 per thousand, such as the Teplitz Semmering Railway .