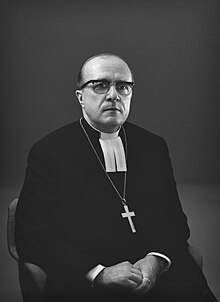 Leevi Aarre Samuel Lauha (born April 1, 1907 in Savonlinna , † May 3, 1988 in Helsinki ) was the second bishop of the Helsinki diocese in the Evangelical Lutheran Church of Finland .

Lauha, son of a pastor, completed his theological training in 1929 and was ordained in Vyborg that same year . He then worked as an assistant preacher in Kangasniemi , and from 1934 as a military chaplain in Lappeenranta . From 1939 to 1944 he was Assistant Professor of Biblical Studies at the University of Helsinki , where he 1940 Dr. theol. received his doctorate. From 1945 to 1964 he was professor of the Old Testament there . From 1958 to 1964 he was editor-in-chief of Kotimaa magazine .

Lauha was elected Bishop of Helsinki in 1964 to succeed Martti Simojoki . In 1972 he retired to do more research again. He was part of the editorial board of the commentary series Biblical Commentary Old Testament , in which his main scientific work also appeared, a German-language scientific commentary on the Old Testament book of Kohelet . In retirement he also worked on the committee for the revision of a Finnish translation of the Bible, from 1974 as deputy chairman.