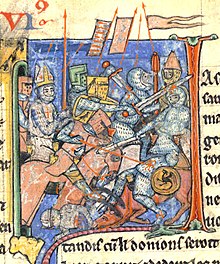 Adhemar de Monteil (left in the picture) with the holy lance in hand; Representation in a manuscript from the 13th century

Adhemar de Monteil (also known as Adémar , Aimar , or Aelarz ) († August 1, 1098 in Antioch ) was Bishop of Le Puy-en-Velay and elected spiritual leader of the First Crusade .

At the Synod of Clermont in 1095, Adhemar showed such great zeal for the crusade that he was appointed Apostolic Legate by Pope Urban II and charged with leading the crusade. While Raymond IV of Toulouse and the other nobles often fought over leadership, in Urban's eyes Adhemar was the actual director of the company, seeing it as a spiritual campaign.

Adhemar negotiated with Alexios I Comnenus in Constantinople , restored discipline among the Crusaders in Nicaea , and was largely responsible for the successful siege of Antioch . After taking the city in June 1098 and the subsequent siege by Kerboga , Adhemar organized a procession through the streets and had the gates blocked so that panicked crusaders could not leave the city. He was extremely skeptical of Peter Bartholomäus ' discovery of the Holy Lance in the city, especially since he knew that such a relic was already venerated in Constantinople. Still, he was willing to make the army believe it was real, especially since it raised the soldiers' morale.

When Kerboga was defeated, Adhemar hosted a council to end the discussions in the leadership, but died on August 1st, perhaps of typhoid . The disputes between the high nobles continued and the march to Jerusalem was delayed for months.

For the common foot soldiers, however, Adhemar remained the leader, especially since some of them wanted to have seen his ghost during the siege of Jerusalem (1099) and reported that he had instructed them to make a procession around the walls. The procession took place and Jerusalem was conquered by the Crusaders.

When Pope Urban found out about Ademar's death in 1098, he appointed Archbishop Dagobert of Pisa as his successor as a crusade legate, but he only reached the Holy Land after the conquest of Jerusalem.

Adhémar de Monteil is one of the main characters in Giuseppe Verdi's opera Jérusalem , which premiered in Paris in 1847.