The Aligarh Movement ( English Aligarh Movement ) is a political movement that originated from the Muslim elite of the Indian subcontinent and aims at the emancipation of the Muslim masses through modern education. It originated in the 19th century, especially with the establishment of Mohammedan Oriental College English ( Muhammedan Anglo-Oriental College , in short: MAO College ) in 1875, the later Muslim University Aligarh ( Aligarh Muslim University ). 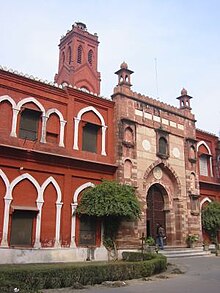