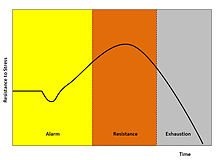 If an organism is exposed to stressors (including pressure to perform, noise, heat, hunger, psychological stress) for a long time , it shows a response that causes a short-term increase in resistance, but in the long term can lead to physical damage and even death.

There are three stages:

The acute physical adaptation reaction is primarily triggered by stress hormones , which serve to quickly provide energy reserves. The catecholamines cause an increase in blood pressure and pulse, while the pituitary gland secretes more ACTH (adrenocorticotropic hormone), which affects the adrenal cortex . This increases their activity and gives more glucocorticoids , such as. B. cortisol . Cortisol inhibits protein synthesis and promotes protein breakdown in bones, muscles and lymphatic tissue. These processes result in an increased release of amino acids into the blood. These free amino acids are used in the liver for the formation of new glucose, the blood sugar level rises. In addition, by inhibiting protein biosynthesis in the lymphatic organs, the activity of the immune system is suppressed ( anti-inflammatory ). This puts the body in a state of increased activity and willingness to perform.

After a brief alarm reaction, the body enters the so-called resistance phase, in which it strives to reduce the current stress level again by removing the stress-inducing stimuli, to reduce the stress hormones released in the alarm reaction and thus to restore the normal state. However, this phase of resistance can only be maintained for a limited period of time.

It comes to the release of somatotropin (STH) and mineralocorticoids , and to increase inflammatory reactions such as stomach ulcers .

If a person is constantly exposed to phases of increased activation, serious long-term damage can occur. On a physical level, the thymus and lymph glands can shrink. It can also cause stomach ulcers. In the medium term, there may be disorders on the cognitive, emotional, vegetative-hormonal and muscular levels.

Examples of disorders due to persistent stress are distorted perceptions and ways of thinking (cognitive level), mood disorders such as irritability, anxiety, insecurity or aggressiveness (emotional level). Further consequences can be reduced performance, inefficient behavior as well as general excessive demands and exhaustion. The exhaustion is shown, among other things, in the fact that the body gets into the aforementioned activation state more quickly (see "alarm reaction"), whereby the activation is more intense and the body recovers only slowly (vegetative-hormonal level).