The Old Town Hall ( Stará radnica in Slovak ) in the old town of Bratislava is one of the oldest stone buildings in the city. 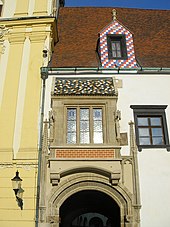 Bay window above the entrance to the old town hall

It has a colorful tiled roof and is an originally Gothic building from the 14th century (first mentioned in 1370). It is located between the main square and the Primatialplatz and in front of it is the Maximiliansbrunnen , the oldest fountain in the city from 1572. In the inner courtyard of the town hall there is a cannonball, which is said to have been shot there by Napoleon's troops.

The house, originally built as the residence of the “Richter Jakob” (first mentioned in 1370), served as the town hall from 1434 after it was acquired by the city in two stages between 1388 and 1421. The tower on the left was built in the 13th century in the Gothic style. Then the Pawer House (Slov. Pawerov dom ) was acquired in 1442 to expand the town hall, and the whole complex was rebuilt in the late Gothic style. An underpass was also built in the course of this renovation. The next renovation to the Renaissance style took place in the middle of the 16th century; In 1591 the city acquired the Unger House (Slov. Ungerov dom ) standing next to it . The tower was damaged by an earthquake in 1586.

After a fire in 1733, it was decided to rebuild the town hall in the Baroque style. Since the entire complex no longer met the requirements in the 19th century, the city bought the Apponyi Palace, built in 1761/62 on the south side of the Old Town Hall, in 1867 ; She then left the old building to the City Museum, which was founded a year later and is now called the Bratislava City Museum . The last major building project took place in the years 1911-12, when a historicizing new building was built for the south and east wings of the inner courtyard.

Restoration work was carried out between 2005 and 2007; Archaeological excavations also took place, which brought new knowledge about the Latène period and the Celtic settlement ( oppidum ) that is suspected here .