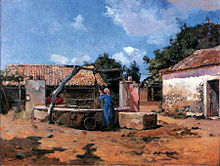 In his hometown Carvalho da Silva Porto received his first artistic lessons in the studios of the painters João António Correia and Tadeu d'Almeida Furtado . Together with his friend and colleague João Marques de Oliveira , he went to Paris in the summer of 1873 . There he became a student at the École des Beaux-Arts and u. a. Taught by Alexandre Cabanel and Adolphe Yvon .

Through his teachers, Carvalho de Silva Porto was invited to take part in the major annual exhibitions of the Salon de Paris . Praised by the public as well as by art critics, he was invited to exhibit at the World Exhibition in Paris in 1878 .

The following year he went on an extensive study tour to and through Italy and at the end of the same year he returned to his homeland. He settled in his hometown and founded his own studio there. He later went to Lisbon and founded the artists' association Grupo do Leão there in 1881 - together with José Malhoa , Rafael and Culumbano Bordalo Pinheiro .

At the age of 42, António Carvalho de Silva Porto died on June 11, 1893 in Lisbon, where he found his final resting place.

On the occasion of the 100th birthday of António Carvalho de Silva Porto, the sculptor Salvador Barata Feyo created a bust of him on behalf of the city of Porto.