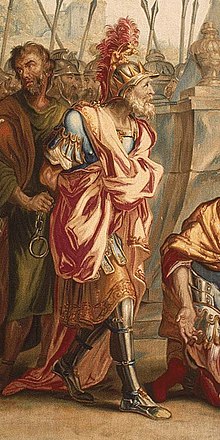 Astyages ( Old Persian (A) reštivaiga / (A) ri-Ištivaiga, Medo Ištumegu) was a Median king and the last ruler of the Median Cyaxares Confederation. He was the son of Kyaxares II. His reign is disputed in scholarship and is either one year, from 551 BC. BC to 550 BC Or, according to Herodotus, from 585 BC. BC to 550 BC BC.

The Greek historian Herodotus writes that Astyages, king of the media and ruler of Persia , was married to Aryenis, daughter of the Lydian king Alyattes II , with whom he is said to have had a daughter, Mandane . He is said to have been plagued by a dream in which Mandane left so much "water" that his capital, Ekbatana , was flooded with it. Fearing for his throne he gave Mandane whose child would otherwise become heir to the throne, no Meder, but a Persian vassal princes, Cambyses I , as his wife. This marriage came from Cyrus II.

Shortly after the marriage, Astyages dreamed that Mandane's womb was growing into a vine that overshadowed all of Asia . When Astyages learned that Mandane was pregnant, he had her guarded by the Meder Harpagos , who was supposed to kill the child after the birth. However, he did not have the heart to kill the child and gave it to a Median cattle herder, who was supposed to abandon it, but took the child for himself. Harpagos did not want to be guilty of the murder of the only male descendant of his relative Astyages. However, he was punished by Astyages by having his own son put in front of him on a spit at a feast.

The story of the youth of Cyrus, told in detail by Herodotus, seems to be a retelling of a Persian royal myth. Astyages is said to have personally supervised the young Cyrus later, but then sent him back to Persia. Cyrus expanded his power here and prepared for war against Astyages. When he found out about this, he sent an army under the leadership of Harpagos to fight against Cyrus. However, Harpagos defected with the army to the Persians. Astyages now moved against Cyrus with all the remaining Medes. He is said to have lost his entire force in a battle near Pasargadai and was taken prisoner by Cyrus.