Truck after a rear-end collision

Car with front damage after a rear-end collision

In the event of a road traffic accident, it is generally assumed that the driver of the vehicle is at fault ( prima facie evidence ). Accident causes are often too small a safety distance , the overcharging of the vehicle and / or inattention of the driver . If the man behind can prove that the man in front braked suddenly and completely unexpectedly and that braking was not necessary due to the traffic, the presumption of innocence is refuted. The car in front is then partially responsible for the rear-end collision - also under insurance law . Historically, the culprit was often the one who braked, not the one behind. In 1934, for example, a newspaper article in a rear-end collision in which a racing cyclist hit a car braking sharply was based on the guilt of the braking motorist.

Rear-end collisions play a very important role in the overall accident situation. In road accidents , one in five out of town and around every seventh in town is a rear-end collision. The vehicle occupants are usually seriously injured.

Also pile-ups due to bad weather and unadjusted rate among the rear-end collisions. The damage caused by this is often settled by the German motor vehicle insurers in a ratio of 1/3: 2/3 at the expense of the man behind. There are also cases in which only the rear damage is replaced, but the front damage is not.

After a chain-end collision , the damage is also proportionately regulated, whereby the causal contribution must be found out. If the sole fault of the last driver can be ruled out due to the lack of concrete evidence, in the event of an accident with three vehicles involved, the damage may be shared by 50% to the second driver and 50% to the third driver.

There are various driver assistance systems : Distance warning devices (also called collision warning devices) signal to the driver that the distance to a vehicle or a traffic obstacle is too short. Adaptive cruise control adaptive cruise control (ACC) can reduce the driving speed automatically. ACCs are often part of an emergency brake assistant . 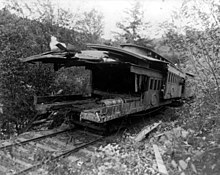 A rear-end collision in rail traffic can be caused by inattentiveness on the part of the driver , brake failure , signaling errors or track vacancy detection system errors. Railways usually have train control systems that prevent rear-end collisions. An example from 2017 is the railway accident in Meerbusch-Osterath .