The safety distance is generally the spatial distance to an object or the time interval to a process that is intended to avoid the occurrence of a hazard .

The safety distance in road traffic is defined 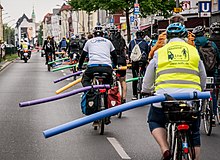 Bicycle demonstration for compliance with the lateral safety distance of 1.5 meters

Prohibition of falling below the specified minimum distance

Sign 273 of the StVO prohibits the driver of a motor vehicle with a gross vehicle weight over 3.5 t or a tractor from falling below the specified minimum distance to a motor vehicle of the same type driving ahead . Passenger cars and buses are excluded.

This symbol (see illustration) indicates that trucks with a permissible total weight of more than 3.5 t must always maintain the specified minimum distance from the vehicle in front. This does not apply to cars> 3.5 t and buses. This also applies to stationary traffic and does not serve so much as a special advice to keep the necessary safety distance to avoid accidents, which is mandatory at all times, but is intended to counter other safety problems. So z. B. the overloading of certain bridges or the spread of a possible fire in a tunnel. In Germany distance offenses can be punished with fines , points and immediate driving license withdrawal.

Determination of the safety distance

In order not to hit an object that could come to an instantaneous standstill, the safety distance must actually be selected as large as the entire stopping distance , i.e. the reaction distance plus the braking distance that increases with the square of the speed .

Distance equal to half the speedometer in meters - at the speed of 80 km / h driven here, this would be at least 40 m, which is clearly undercut

The absolute minimum distance must be the personal reaction path. Adhering to the entire stopping distance is seldom necessary, however, since the man in front is also OK. d. Usually has a braking distance, so does not come to an immediate stop. The recommended safety distance therefore de facto only increases linearly with the speed (see adjacent figure).

The response time is typically one second. Twice the value, i.e. t r = 2s, should be observed as the minimum safety distance s . A conversion in meters at a speed v in km / h gives:

A safety distance of 1.8 seconds corresponds roughly to the distance of half the speedometer display in meters.

Safety distance and speed determine the capacity of a road. It is 0.2 (10 km / h) to 0.5 (120 km / h) vehicles per second and increases only insignificantly at higher speeds. If the stopping distance is not used as the basis for the reaction path, the vehicle capacity falls well below 0.2 vehicles per second above 100 km / h. Taking psychological factors into account also reduces capacity at higher speeds. The maximum is observed at a speed of 85 km / h. The vehicle capacity of up to 2600 vehicles per hour and lane, which is also measured, can only be achieved if the safety distance is less than 2 seconds.

Non-compliance with the safety distance can be determined by various technical measuring methods. In the bridge distance measurement process, a distinction must be made between the Traffipax process and the Distanova process. Here, the distance behavior of the monitored vehicle in the long range is first determined visually or by means of a photo. If the distance is suspected, the safety distance is determined in the close range with the help of the lane markings and stopwatches or photos. With the video distance measurement method (VAMA), the measuring system is located on a bridge. The incoming traffic is continuously recorded after the initiation of a recording process, both in the close range and in the long range. Then the two recordings are put together as a sectional image and the safety distance is determined. In addition, other technical devices are used to determine whether the safety distance has been observed: Police Pilot System (PPS), Traffic Control System (VKS), Vidista.

The German accident research of the insurers (UDV) has shown with a "real" accident at 100 km / h that even a professional behind the wheel can no longer react if the vehicle in front suddenly brakes and the safety distance is not maintained. The result: At a distance of 15 meters - a value that can be observed every day on German autobahns - a rear-end collision inevitably occurs.

The federal statistics show around 42,000 accidents with injuries or fatalities for 2010, where the cause was “insufficient safety distance”. That is around 12% of all accidents in this category. In 2008, 29% of all fatal accidents on motorways were caused by rear-end driving. A look at the insurer's accident database also shows that serious and fatal injuries are even more likely with two vehicles in motion (as in the live test) than with rear-end collisions in which one vehicle is already stationary. In addition, the severity of the accident increases again if more than two cars are involved in the crash. Then one in three accidents can be expected to result in serious injury or death.

A closer analysis of these rear-end collisions outside of built-up areas reveals that 80% of the causers are male. Eight out of ten accidents occur on freely navigable routes, i.e. without intersections, junctions or roundabouts disrupting the flow of traffic.

According to the accident research of the insurer (UDV), the following measures could defuse the problem: Intelligent cruise control in combination with distance warning and emergency braking systems . These should be installed in all cars. Retrofittable distance warning systems should be increasingly offered and their installation recommended. More information should be provided about the perception deficits and aids (speedometer view, delineator posts). The "unteachable" should be sanctioned with regular controls.

On platforms , optically separated lines mark the safety distance to the dangers posed by rail vehicles traveling on the tracks.

When trains pass quickly on platforms, there is a risk of being carried away by the resulting suction. This can lead to fatal accidents. Since there are usually no mechanical barriers, a safety area is marked on the platforms that should only be crossed after the train has come to a standstill. The marking is done by white lines, in some cases also by hatching and, in the case of newly built or renovated platforms, also by tactile stripes .

Deutsche Bahn points out the dangers in safety information for passengers. The following rules apply in Germany:

A safety distance of 20 m is recommended for defective high-voltage lines that touch the ground and about which no further information such as voltage level is available, as a so-called voltage funnel is formed in the ground . The safety distance of 20 m is designed for an earth resistance of 1  kΩ with an earth fault current of 132  A and a maximum permissible step voltage of 75 V, which requires conductor voltages of more than 100 kV. In the area of medium-voltage lines, the safety distance is reduced to a few meters due to the lower voltages of a few 10 kV.

In the case of normally live parts that do not touch the ground, for example conductor ropes of overhead lines or high-voltage lines or damaged electrical installations whose safe absence of voltage is not certain, a safety distance dependent on the voltage level must be maintained. The following safety distances are prescribed for electrical laypersons:

Unintentional contact, particularly with moving parts of the device, can cause considerable damage. Therefore, depending on the type of environment, type of movements and sizes and masses, special safety distances are defined in the relevant safety regulations.

In the area of fire protection , preventive measures - such as safety distances between combustible elements - can prevent the flames from spreading or at least make it difficult or delay it. A good example of this is the old salt works in Bad Reichenhall. After the city ​​fire of 1834 , in which a fire that broke out in one of the saline's brewhouses spread rapidly across the city with its narrow streets, when building the new saline, care was taken to ensure that there was plenty of space both within the facility and to neighboring buildings create.

With the COVID-19 pandemic , the safety distance became increasingly important in 2020 as a measure to protect against infection. In several countries around the world, physical distances between people of at least 1.50 meters have been recommended or required by law.