This article deals with the nautical term; for other meanings of eye level - technical as well as social-psychological - see ibid. 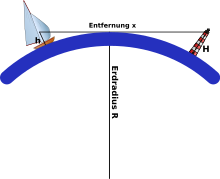 In nautical navigation - especially in terrestrial and astronomical navigation - the vertical distance between the observing eye of a navigator and a reference surface is referred to as eye level (less often: eye level ) . While this is usually the surface of the observer on land, this is the sea ​​level on ships .

In astronavigation in particular, the eye height is used in numerous calculations.

According to DIN  13312, the eye height has the abbreviation Ah and the symbol .

In addition to the height of the beacon above sea level, the height of the observer above sea ​​level also affects the calculation of the visibility of lighthouses . The greater the eye level of the observer, the further away lighthouses are visible. If you reduce your eye level, for example by crouching, a beacon can disappear behind the horizon. If the height of the fire is known, the distance to the beacon can be determined from eye level and the known radius of the earth. The procedure for calculating the distance is also called “fire in the chimney” in navigation, with the chimney being the nautical expression for the visible horizon .