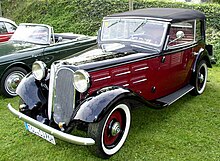 BMW electric car with only cited kidneys, study from 2017

The BMW kidneys , the two-part rounded radiator grille , have long been a characteristic feature of all BMW car models.

At the factory, BMW first used kidney-shaped radiator grilles in the BMW 303 in 1933 . In one of the company's stories , Horst Mönnich wrote about Fritz Fiedler , who came to BMW as chief designer from Horch in 1932 : “You could feel Fiedler's signature on the radiator. He had placed it in a slightly inclined shape and rounded the corners to reduce air resistance, which naturally resulted in the so-called BMW kidney. "

In the BMW i3 electric car presented in 2013 , the two kidneys are completely closed for the first time, since air-cooled electric motors do not require a radiator grille. The kidney remains only as a design element.

The shape was allegedly introduced by the coachbuilder Ihle , Bruchsal , who also used it to make superstructures for other makes of chassis. In fact, the production of the Ihle roadster bodies did not begin until 1934, two years after the end of production of the BMW 3/15 and five years after the last Dixi 3/15, originally with the rectangular radiator grille that was customary at Ihle until then, which became a little narrower at the bottom. from approx. 1936 then clearly based on the BMW 303 and BMW 315/1 with kidney shape.