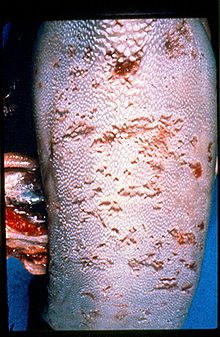 The Bovine Virus Diarrhea / Mucosal Disease , briefly BVD / MD (triggered by the Bovine Viral Diarrhea virus , BVDV), is a fairly common viral disease complex of the cattle , which due to its epidemiology (both "hit and run" and " infect and persist ") has a special position. The infection is often cyclical within a herd. Viral diarrhea was first described in 1946, while mucosal disease was first mentioned in the literature in 1953. The common cause was proven in 1959. The disease complex is common worldwide.

The virus can trigger several clinical pictures, which differ greatly in morbidity and mortality . In the particularly endangered group of persistently infected (or PI) animals, both are 100 percent.

The bovine virus diarrhea , short BVD, is a viral infection of cattle caused by a Pestivirus of the family Flaviviridae. BVD occurs worldwide and is one of the most economically important diseases in cattle. Recently published reviews show that the worldwide monetary BVD production losses and expenditures for prevention and intervention measures vary greatly by cow and country. The clinical picture is extremely diverse.

The mucosal disease , short-MD is an increasingly fatal disease mostly young cattle (3 to 24 months) caused by erosion on all mucous membranes is characterized (see picture). The lack of an immune reaction despite the presence of virus of the cytopathic form is remarkable .

If the infection occurs in an animal in the first or last third of pregnancy , severe malformations or abortion of the fruit can occur. Infections with the cytopathic form in the second trimester of pregnancy usually lead to abortion or mummification .

In a recent global survey, PI prevalence was shown to vary from low (≤0.8% Europe, North America, Australia), medium (> 0.8% to 1.6% East Asia) to high (> 1.6% West Asia) range. Countries that had not implemented any intervention measures (including vaccination) had the highest BVDV prevalence.

The infection occurs either horizontally (ie from another animal) or vertically (ie already during pregnancy from the mother to the unborn calf).

In the case of a horizontal infection , the animal develops symptoms of BVD after being infected with cytopathic or non-cytopathic BVDV, eliminates the virus in a normal immune reaction with the formation of antibodies, and maintains permanent immunity ( hit-and-run strategy ).

The vertical infection can be carried out when the mother animal in the first third infected (about 1-3. Gestation) of gestation with the non-cytopathic BVDV. The virus then spreads to the fetus. Since this is in the phase of immune tolerance , his immune system does not recognize the virus as a foreign antigen . It therefore does not form any antibodies and the young animal remains infected with the virus for life and excretes it permanently without showing any symptoms . Such PI animals (PI stands for persistently infected ) form a virus reservoir within the population ( infect-and-persist strategy ).

The introduction into a cattle herd can take place in different ways. It is often done through the setting of persistently infected animals. Infections when grazing (common alpine pasture of first pregnant cattle!), At exhibitions and animal markets are also possible. Inadequate hygienic precautions represent a further risk . Contaminated transport vehicles, equipment, clothing and animal feed come into question as disease vectors . The risk of transmission by biting insects or pests such as rats and mice as well as transmission through the air appears to be low, however.

From PI animal to MD victim

As already mentioned, BVDV occurs in a cytopathic and a non-cytopathic form, which are caused by mutating a virus gene. If a virus in a PI animal mutates from the non-cytopathic to the cytopathic form, it multiplies in the mucous membranes and damages them, which leads to the typical erosions of the MD. Since the immune system does not recognize the virus as foreign, there is no immune reaction, so that the disease is always fatal.

After the PI animals are the source of infection, they must be identified and eliminated. In order to clearly identify the status of an animal, both virus and antibody detection are necessary. The following results are possible:

To detect BVDV in a herd, a serological examination of the milk is possible in addition to the blood test.

In the Federal Republic of Germany, the virological examination of ear punch samples taken as part of the official identification of newborn calves is of particular importance. This is generally done using PCR .

In Germany there is an obligation to notify the disease according to the Animal Health Act (TierGesG). Notification is also required in Austria.

The fight is based on two pillars:

There is a vaccination against the virus, which of course has no effect on PI animals. In addition, when the vaccination is used, it is no longer possible to reliably differentiate between infected and non-infected herds.

In Switzerland ran a nationally coordinated eradication program between 2008 and 2012.. After 99.5% of the cattle holdings were BVD-free, the comprehensive virological examination of the newborn calves was discontinued. However, the epidemic is still not completely eradicated. In mid-March 2019, 99.2% of the farms were BVD-free, 49 farms were blocked due to BVD suspicion or BVD cases, and a further 245 farms had individual pregnant animals in their herd that had been blocked as a precaution due to BVD.

In North Rhine-Westphalia there has been a voluntary control procedure since October 1st, 2009. The aim is to be able to give as many stocks as possible the status of "BVD-unsuspicious stocks". Since January 1, 2011, the Federal Republic of Germany has been obliged to renovate. The legal basis for this is the BVDV regulation .

In August 2004 a national compulsory BVD control program was implemented in Austria. This enabled the incidence of illnesses (due to BVDV) to be reduced considerably.

BVD-MD is an important economic factor that can significantly reduce the productivity of a herd of cattle. In particular, keeping pregnant cattle together on the mountain pasture is problematic, as it is highly likely that they come into contact with the virus, become infected and give birth to PI animals. It was found that the cost per dairy cow was approximately $ 25 higher than that of a meat-producing beef. Factors such as mortality, premature slaughter, abortions and new infections significantly influence the BVD production losses per animal.