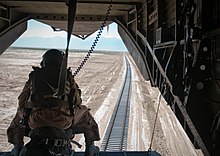 The Termiz – Mazar-e Sharif railway was the first cross-border railway line between Uzbekistan and Afghanistan .

The route leads from Termiz (Uzbekistan) first over the border river Amu Darya and the bridge of friendship to the Afghan border station Hairatan . To the south there is a desert area. As far as Naiababad the route leads south along a main road and turns west there, where the end point Gur-e Mar , 18 km east of Mazar-e Sharif , is reached.

In the course of the Soviet-Afghan war , the lack of a rail link to Afghanistan posed a significant logistical problem for the armed forces of the Soviet Union . In order to remedy the logistical deficit, the Soviet Union built a section of each route from Turkmenistan and Uzbekistan across the Afghan border guided. The connection from Uzbekistan was about ten kilometers from Termiz to Hairatan. The border runs here in Amu Darya and for crossing the border, the Bridge of Friendship was expanded into a combined road and rail bridge, which was opened on May 12, 1982. The route was closed by Uzbekistan due to the political situation in 1996. In 2001, traffic was resumed - initially for trains with relief supplies.

The single-track line is laid out in broad gauge of 1520 mm in connection with the conditions of the former Soviet railway network . It was expanded for a top speed of 80 km / h. It is about 75 km long in the Afghan part. Every 20 kilometers a crossing station with a 1.7 kilometer long siding was installed and 16 security posts were set up along the route, which both monitor the level crossings and secure the route against attacks and sabotage militarily.

At the end of August 2011, the Uzbek railways received an operating license for the line initially limited to three years from the Afghan government and thus formally began operating. The first test freight train ran on December 21, 2011. The line was officially inaugurated on February 3, 2012. On this day, the first commercial freight train reached Mazar-e Sharif. During the three years of Uzbek operation of the route, Afghan personnel have been trained to take over operations. Today the line is operated by the Afghan Railway Authority (AfRA) in the part on Afghan territory . Only freight trains run.

The main reason for the operation is the military transport requirement during the Afghan war . The rail connection in Afghanistan was intended to reduce the transport costs for military goods compared to air freight from around US $ 14,000 to US $ 300–500 per ton. For this purpose, it was agreed with Russia and other transit countries that the passage of corresponding trains from Western Europe will be made possible. In addition to the military transport requirements, those involved hope that the expansion of the route will create a more intensive link between the economies of the Central Asian republics and that of Afghanistan. About half of all Afghan imports came into the country via the railroad in 2011. In September 2016, a freight train from China reached Hairatan station for the first time .

The plan is to extend the route east to Tajikistan (see: here ) and west to Turkmenistan (see: here ). The connection to the south in the direction of Kabul is currently failing due to the security situation and is not expected before the second half of the 2020s.