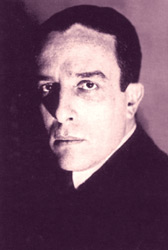 Moreno came from a family of Spanish immigrants; In 1896 he went back to Spain with his family. At the age of 13 he returned to his hometown in 1899 and completed his school days there. Then he started at the University to study medicine. In 1912 he was able to successfully complete this course with a doctorate .

In 1915 Fernández Moreno made his successful debut with his poetry anthology "Las inciales del Misal". Between 1917 and 1924 he practiced as a doctor in various villages in the province of Buenos Aires . Other literary works followed, based on, among other things, his daily experiences and events.

In 1924 he gave up his profession and became a teacher of literature and history in various schools in the villages he had previously looked after as a doctor. During this time he also began to work as a freelancer for various newspapers and magazines such as “ La Nación ”, “ Nosotros ”, “ La Prensa ” and others.

In 1935 Moreno was accepted as a member of the Academie Argentina de Letras . After his marriage he settled with his family in Flores and lived there as a freelance writer.

Fernández Moreno died of a stroke in Buenos Aires at the age of 63 and found his final resting place there.

After the exquisite refinement of modernism , the contemplative simplicity of his first lyrical works, beginning with “Las iniciales del misal” (1915), is seen as something revolutionary: a poet had looked at his surroundings. The subjects that Fernández Moreno deals with are things of daily life in the city or in the province, which he perceives and reproduces with the sensitivity of the Impressionists .

Enrique Anderson Imbert notes in his "History of Literature" about Fernández Moreno:

His poetry reproduces, with mirror image fidelity, the image of a poet who is conscious of being a poet.