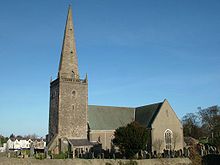 Bangor Abbey ( Irish Mainistir Bheannchair ) was an abbey in Bangor in County Down in Northern Ireland . The foundation stone was laid in 558 by St. Comgall . In the Middle Ages , Bangor Abbey was a training and study center for missionaries . Known as the "Light of the World", it was from here that Saint Columban began his famous missionary journey through Europe. The abbey is listed in Category A (Grade A) of the Statutory List of Buildings of Special Architectural or Historic Interest and is a listed building.

After repeated attacks by Danish Vikings and after its destruction in 824, only a few parts of the building remained of the original abbey .

The first abbot was St. Comgall, under whose direction up to 3,000 monks found their way into the monastery. Many start-ups started here. In the 7th and 8th centuries there was a scriptorium in the monastery , so the Antiphonarium Benchorense was built here from around 680 to 691 , a copy of which can be seen in the local museum. The original is now in the Biblioteca Ambrosiana in Milan .

The abbey was rebuilt by St. Malachy in the 12th century . The church tower, which is still preserved today, was built in the 14th century. In 1469 the building was given to the Franciscans for use. A century later the abbey was run by Augustinian canons . The abbey was finally dissolved under King James I (1566–1625).

Sir James Hamilton restored the church building in 1617, where he was buried after his death in 1644.

On a mural inside the church the ascension of Jesus is shown with the Saints Comgall, Gallus and Columban at his feet.