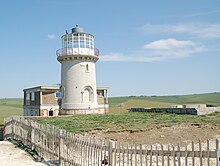 Beachy Head is a headland on the south coast of England near the town of Eastbourne in East Sussex . The chalk cliff , part of the South Downs , is the highest in Great Britain at 162 m above sea level . It is joined by the seven other chalk cliffs known as the Seven Sisters .

The name has nothing to do with English beach ("beach"). The cliff was named in 1274 with French Beauchef ("beautiful cape"), 1317 with Beauchief and from 1724 with Beachy Head .

The good visibility of Beachy Head from the sea makes it a landmark for ships on the English Channel . At the same time, the rock posed a danger to shipping . In 1831, the first lighthouse , the so-called Belle Tout Lighthouse , was built on a cliff just under two kilometers to the west. The lighthouse was put into operation in 1834. Since it was difficult to see in haze and low clouds, a new 43 m high lighthouse was built in the sea off Beachy Head, which was completed in October 1902. Its light is visible up to a distance of 26 nautical miles (48 km). The Belle Tout Lighthouse was decommissioned and has been used privately since then. Due to the erosion of the rock in 1999, it had to be moved about 17 m inland.