Model of a mortar aboard the Foudroyante , an 18th century bombard 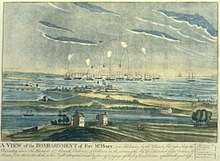 Bombards bombard Fort McHenry during the Battle of Baltimore

Model from 1742 from the National Maritime Museum, Greenwich

Bombards or mortar ships (Engl. Bomb vessel , fr. Galiote à bombe ) were heavy mortars equipped sailing ships which served to destroy coastal defenses or shoot coastal towns on fire. The first galiote à bombe is said to have been designed and built by Bernard Renau d'Elicagaray in 1682 , based on the Dutch Galiot . The first mortar ships were ketch rigged , but from the middle of the 18th century the full-ship rig became popular because of its easier handling .

When artillery was further developed after the Napoleonic Wars and cannons could now also fire grenades effectively, there was no longer any military need for sea-going mortar ships. Mortar ships were mostly classified as sloops in the Royal Navy .