The fracture mechanics deals with the failure of cracked components or the propagation of cracks under static and dynamic loads up to the break . It contains elements of materials science , elastostatics and plastomechanics .

All fracture mechanics concepts have in common that an already existing defect ( crack ) in the component is assumed. This can arise as a result of the manufacturing process as blowholes , inclusions , stress cracks or the like, or it can only be formed during use, e.g. B. with cyclical loading . The damage mechanics deals with the emergence and spread of these micro-cracks of up to 1 mm in length. On the basis of assumptions about the geometry and stress of this flaw, a toughness measure is used to formulate conditions under which impermissible crack growth and even fracture (by exceeding the breaking strength ) occur. The reliability of the classical strength calculation should thus be increased. The fracture toughness of a material is a measure of the ease with which cracks form and enlarge in this material. 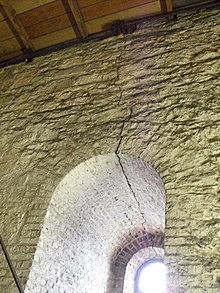 Wall crack due to settlement

The British engineer Alan Arnold Griffith investigated the influence of superficial scratches on stability and developed a theory of fracture, in particular a fracture criterion of brittle fracture .

In the 1930s and 40s there was an accumulation of catastrophic damage from brittle fracture to large welded steel structures such as ships and bridges . From the investigation of this damage, an independent discipline developed whose subject matter is the behavior of cracked bodies.

Fracture mechanics experienced rapid further development in the 1970s , particularly in connection with the design of nuclear components.

Today's models allow the sinking of the Titanic to be reconstructed as the failure of a wrongly alloyed steel.

With the software AFGROW , the previous versions of which were programmed from the beginning of the 1980s, a tool is available for calculating fracture mechanics and crack propagation within the framework of stability studies of metallic materials.