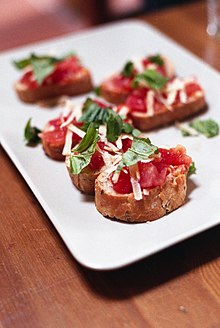 Bruschetta with chopped tomatoes and basil

Bruschetta [ brusˈketːa , listen ? / i ] belongs to the Italian antipasti . The original "poor people's food" comes from central and southern Italy . Freshly toasted bread, such as Pane Pugliese (with a hard crust), is rubbed with a halved clove of garlic while still warm and then drizzled with olive oil, peppered and salted as desired and consumed immediately.

Bruschetta is often provided with a topping, depending on the region and preference, numerous variations are known: