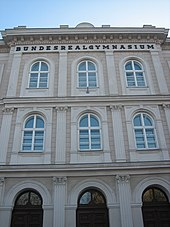 The school building consists of two parts. While the special classrooms, such as chemistry and biology halls, are housed in the old building, the large auditorium in the new building is a meeting place for all students, where cultural school events are also held.

The BRG Krems as a member of the UNESCO school project

As a member of the UNESCO school project , the school tries to contribute to the realization of the goals of UNESCO. That is why the school regularly organizes student exchanges with a Czech partner school. Disabled people are also integrated into school life and are supported. The school organized a tropical forest project and held an art auction, the proceeds of which went to the victims of the 2004 flood disaster in South Asia . The school works together with the Youth Red Cross and the school takes part in other projects of the school network.

In the lower grades (first to fourth grade), students have English as their first foreign language. In the third and fourth grades there is a linguistic branch in which French is increasingly taught as a second foreign language. In the other, mathematical branch, geometrical drawing and media design are increasingly taught. In the upper level (fifth to eighth grade) you can either have French lessons or learn the languages ​​Latin or Italian. In the upper level there are also eight compulsory elective hours per week. In the seventh grade, students have to choose between the subject combination biology and physics and the subject descriptive geometry. Students also have the choice between music and art.