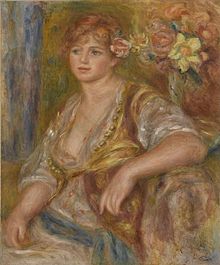 Catherine Hessling was one of the last to model Auguste Renoir and was married to his son Jean Renoir from 1920 to 1930 . They had a son with him. From Renoir's first film Une vie sans joie (1924), she took on the leading role in several of his films until 1928. Her most important acting performance was the title role in the Zola film Nana (1926). Hessling also appeared in some of Alberto Cavalcanti's films in the 1920s .

Filming of her life