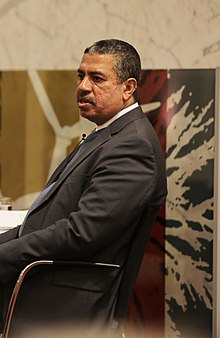 Chalid Bahah graduated from the Indian University of Pune . Until 2011 he was a member of the ruling General People's Congress and at times Minister for Oil and Mineral Resources. He has supported the revolution in Yemen since March 2011, demanded the resignation of President Ali Abdullah Salih in order to avoid further bloodshed, and resigned from the party in protest against the violence exercised by the regime against the people. Then he was his country's ambassador to Canada . After Abed Rabbo Mansur Hadi was elected President of Yemen, he made Bahah permanent representative to the United Nations and designated him as head of government on October 14, 2014. He took office as the successor to Mohammed Basindawa on November 9, 2014. After Houthi rebels conquered the capital of the country, Bahah and then President Hadi announced their resignation, the cabinet dissolved and fled to Saudi Arabia. Parliament did not accept the resignation. Subsequently, Hadi and Bahah renewed their government in exile and returned to the provisional capital Aden on September 16 . On April 3, 2016, Khalid Bahah lost all government offices after a power struggle with President Hadi. Ahmed Obeid bin Daghr was succeeded as Prime Minister, and General Ali Mohsen al-Ahmar became the new Vice President .

Prime Minister of the Republic of Yemen