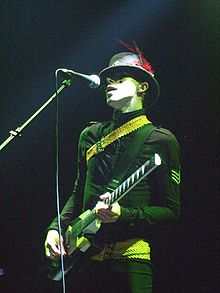 Chris Corner (born January 23, 1974 ) is an English musician, music producer and songwriter who became known as a founding member of the band Sneaker Pimps and through his solo project IAMX .

The IAMX debut album Kiss + Swallow was released in 2004. It features electronic songs with trip-hop and electroclash influences. Most of the songs were originally planned for a fourth Sneaker Pimps album (project title SP4 ).

The second album by IAMX is called The Alternative and was released on April 21, 2006. The following year, the British version of the album was released, with many tracks being completely revised and sometimes sounding a little less electronic - this was then also released in the USA . In June 2008, the debut album Kiss and Swallow was re-released in the UK and the US and contains the previously unreleased song I-Polaroids and a remix of Kiss and Swallow by Moonbootica .

In 2010, Corner contributed the song Nightlife to the soundtrack of Wir sind die Nacht as IAMX . Between 2011 and 2015 three more albums were released.

Chris Corner lived in Woltersdorf (near Berlin) and worked on his music in a disused GDR factory building. He later moved to Los Angeles.